Doc tells her friends, including a worrisome Bronty, to feel their emotions when Army Al, an action figure, is separated from them after being called for duty, even if it's a trip to the forest with Donny and his Turtle Scouts troop. Doc and the toys support each other and help prepare Al to be his best because they are afraid that something bad might happen to him. 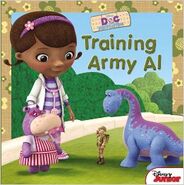