Traverse Town is the first major playable world in Kingdom Hearts outside of Destiny Islands and serves as the main hub of the first game. A quaint and calm town, Traverse Town features a sky of eternal night where stars can be seen clearly. Survivors of the worlds lost to the Heartless find their way here after their world has been destroyed.

Traverse Town is the first place Sora lands after he is drawn out of the disappearing Destiny Islands.

After the destruction of Destiny Islands, Sora ends up in Traverse Town while Donald and Goofy arrive at the same time through the use of a Gummi Ship. He is awakened by Pluto and ventures out into the town, searching for his friends; humorously, Sora often leaves an area at the same time that Donald and Goofy enter, just barely missing them. Eventually, Sora meets Leon, who he fights. Regardless of the outcome, Sora passes out and finds himself in a hotel where he meets Yuffie and learns about the Keyblade and the Heartless while next door, Aerith explains the same things to Donald and Goofy.

Heartless attack and Leon runs out to defend the town from them. Before leaving, Leon tells Sora not to worry about the attacking Soldier and Shadow Heartless and to find their leader. As Sora enters the Third District, Donald and Goofy are blown off a balcony above and land on him. The three battle and defeat numerous Soldier Heartless before being attacked by and defeating the Guard Armor. Afterwards, the three become companions and leave to find Riku, Kairi, and King Mickey. They return multiple times: Sora reuniting with Riku and sealing the Keyhole, meeting Merlin and the Fairy Godmother, and also when a saved Kairi gives Sora her lucky charm. When the worlds are restored after the defeat of Ansem, Seeker of Darkness, the fate of Traverse Town is unknown, as its residents return to their worlds.

A memory-created version of Traverse Town is the first world Sora visits while in Castle Oblivion as this is where Marluxia teaches Sora how to fight within the castle. Here he meets Leon and the others, but they don't recognize Sora, although they somehow remember his name. This is a recurring problem for the rest of the game. Here Leon teaches Sora about Sleights. Aerith tells Sora near the end of the visit that she and everyone else may be nothing but a figment of Sora's memory.

Although Traverse Town is not a playable world in Kingdom Hearts 358/2 Days, the world is sometimes displayed when Roxas has flashbacks of Sora's memories.

While Traverse Town does not appear in Kingdom Hearts II, it is frequently mentioned and shown in Sora's memory restoration. Merlin claims that he retrieved Winnie the Pooh's storybook out of the town's Zero District, and it is mentioned several times in the Ansem's Reports.

In Kingdom Hearts coded it appears that the first district is no longer peaceful, as a battle against numerous Heartless and "bugs" is witnessed. In episode 2, Data Sora wakes up by Data Pluto in Traverse Town, like in the first game. King Mickey tells Sora to investigate this world. While he was investigating, he meets Data Cid. Cid is trying to find Data Huey, Dewey, and Louie, whom Sora manages to find. Each of them had found a shiny piece, which together almost form a keyhole.

Sora then meets a black coated man who gives him the 4th piece of the Keyhole. Later, Mickey tells him that the Keyhole probably leads to the corrupted place, similar to the time in Destiny Island. Sora then opens it with his Keyblade which leads him to another space in Traverse Town. He was running and encounters lots of blocks. He continues running and he meets a Guard Amour and has to fight it. After Sora fixes Traverse Town a new power awakens inside of Data Sora. Meanwhile, in the real Disney Castle, a new message appeared, saying "Their torment has been lessened."

In order to save the existences of his friends, Joshua takes the last remnants of their dreams and searches for a safe place for them. Traverse Town appears before him in the Realm of Dreams, and Rhyme's dreams open a portal to the town. Joshua is surprised to discover that dreams take physical form in that world and he decides to try restoring his friends' existences by piecing their dreams together.

Sora and Riku arrive in the sleeping Traverse Town at the beginning of their Mark of Mastery exam, but they are separated into two separate, yet connected iterations of the town. They meet the former Shibuya residents who, despite being separated from their partners, continue to play the Reaper's Game. Neku and Joshua introduce Sora and Riku, respectively, to using Dream Eaters in battle.

In Sora's iteration of the town, Neku brings Sora to the Third District, to where a hooded figure is waiting. While Neku tries to stop him from hurting Sora, Sora drops for the first time.

On Riku's side, Beat encounters him and Joshua in the Second District and he tries to make his Kooma Panda attack Joshua to no avail. After Riku defeats the Dream Eater, Beat gives up and he expresses his wish to protect Rhyme, just before Riku drops.

Sora begins searching the town for Neku while looking for his partner and he finds Rhyme in the Fourth District. Although she doesn't remember whose partner she is, Sora takes her with him to find Neku.

Riku sees Shiki being chased by Dream Eaters into the First District. He saves her, then agrees to accompany her through the town. They arrive in the Fifth District, where they encounter the hooded figure, who tells Riku he will wander in sleep forever. Beat arrives to take care of Shiki, and he tells Riku the hooded figure had told Shiki he could send her home if she brought him Riku. The mysterious youth reveals his face, then summons the Hockomonkey, which enters the Garden. The youth disappears in a Corridor of Darkness and Riku follows the Hockomonkey into the Garden, leaving Beat to watch over Shiki.

Sora and Rhyme arrive in the Fifth District, where they find Neku on the roof of the Garden. Neku explains that the black-coated figure told him he could send Neku and his partner home, in exchange for Sora. Sora forgives Neku and asks if Rhyme is his partner. Even as Neku says no, Rhyme disappears. The mysterious youth appears and summons the Hockomonkey, before disappearing in a Dark Corridor. Sora defeats the Hockomonkey and as it breaks into pieces overhead, images of Shiki and Riku appear. Joshua appears, having used Rhyme's portal to save her and move between two Traverse Towns. Joshua explains the nature of the town, including the two iterations, and he speculates that the world was split because of the figure in the black coat. Sora, Neku, and Rhyme watch the images of Riku, Shiki, and Beat.

In the meantime, Riku defeats the Hockomonkey and when it breaks into pieces, he, Beat, and Shiki see images of Sora, Rhyme, Neku, and Joshua standing around in the middle of the district. Although Beat is frustrated that he can't touch Rhyme, Riku reassures him that they will reach each other as long as they're hearts are connected.

Joshua talks to both Sora and Riku across the separation between their two sides, explaining how he and his friends came to Traverse Town. He surprises them by sprouting wings and flying away, leaving them to lock the Traverse Town Keyhole.

By the time Sora and Riku return to the town, the partners are reunited. As Joshua explains to Sora, they continue to play the Reaper's Game in order to save themselves from being erased from existence and return to their home world. In their new mission, they must defeat the Spellican, which has the power to summon many Dream Eater minions. Joshua asks Sora if he and Riku can help them out with their mission and Sora agrees readily and goes to assist Neku and Shiki in the Fountain Plaza. After Sora beats the Spellican's minions, it escapes to Riku's side. While Sora is meeting Shiki, Joshua arrives and tells them his plan to corner the Spellican in the Third District.

Joshua also meets up with Riku when he arrives in the First District. He tells him about the Players' new mission, adding that Sora is already helping them out, and asks Riku to help Beat and Rhyme in the Fountain Plaza. He also tells Riku about the time disparity between the two Traverse Towns, suggesting that the two worlds are somehow distinct from each other. Joshua notes that it implies that they are within a dream, and tells Riku that it could be very significant for him and Sora.

Riku finds Beat and Rhyme facing the Spellican, which becomes agitated when the three of them become wrapped up in introductions and banter between Beat and Rhyme. While the two Players take on the Spellican's summoned minions, Riku follows it into the Back Streets. It summons a herd of Cera Terrors to hold him off, but he defeats them, and Joshua points him towards the Third District.

When Riku, Beat, and Rhyme corner the Spellican in the Third District, it moves to Sora's side. Joshua warns Riku about trusting the dream he is in and Riku locks the second Traverse Town Keyhole.

Sora arrives in the Third District just as the Spellican emerges. While Neku and Shiki take on the lesser minions, Sora fights and defeats the Hockomonkey, Wargoyle, and Char Clawbster the Spellican summons. With its minions beaten, the Spellican escapes the town through its Keyhole, but Sora promises to go after it in order to complete the Players' mission. Neku and Shiki invite Sora to visit them in Shibuya, and he locks the Keyhole.

After Sora and Riku finish the Mark of Mastery exam, Sora returns to the sleeping Traverse Town, where he reunites with his Spirit Dream Eaters.

The Item Shop in the First District

The fountain in the Second District. 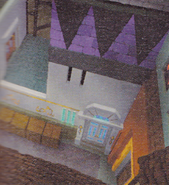 The entrance to the Dalmatians' House. 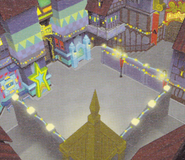 The Third District from above 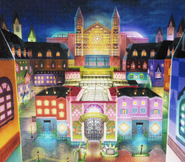 Concept art of the Traverse Town room in Castle Oblivion 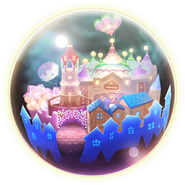