E
Treasure Planet is a 2002 science-fiction video game based on the movie of the same name. The game was first released on the Game Boy Advance on October 31, 2002, and then released officially on the PlayStation and PlayStation 2 on November 11, 2002. 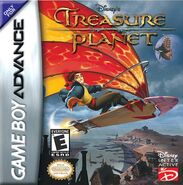 This video game article is a stub. You can help Disney Wiki by expanding it.
Retrieved from "https://disney.fandom.com/wiki/Treasure_Planet_(video_game)?oldid=4107826"
Community content is available under CC-BY-SA unless otherwise noted.