Captain Mary Oceaneer has a crate aboard the RV Oceaneer Lab identifying her as having excavated Isla de Muerta. This crate mentions containing the cursed treasure and that Mary uses prongs when handling its medallions.

The chest makes a minor appearance in this attraction at the bottom of the Ocean as part of Davy Jones' treasure. 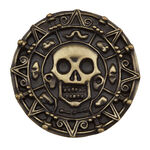 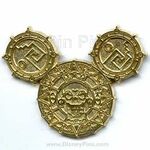