“What I'd like to lay my hands on would be the Treasure of Cortés."
"You and every other buccaneer for the last hundred and fifty years. Nobody knows what happened to it.”
―Christophe-Julien de Rapièr and Jack Sparrow

According to legends, the Aztecs delivered the chest to conquistador Hernán Cortés as blood money paid to stem the slaughter he wreaked upon with his armies. But because the gold fueled Cortés' greed, the Heathen Gods placed a curse over the gold: any mortal that removes a piece from the chest shall be damned to walk the earth as an undead gorror. The curse could be broken only if the plundered treasure was restored in total and a blood debt was repaid. Only Hector Barbossa's crew of the Black Pearl were able to successfully find the treasure, though they would later regret it.

“This...it's some kind of sacred symbol?"
"It's an ancient design. The legends say it was imprinted on the blood money demanded by Cortés."
"Are you talking about the lost treasure? The one they say is on an island of the dead somewhere?”
―Jack Sparrow and Esmeralda

In the early 16th century, during the Spanish conquest of the Aztec Empire in Mexico, the Aztecs placed 882 identical pieces of Aztec gold in a stone chest which they gave to the conquistador Hernán Cortés as "blood money paid to stem the slaughter he wreaked upon them with his armies." But instead of satisfying Cortés, it merely fueled his greed. In response, the heathen gods placed a curse upon the gold: any mortal who removed a piece of the gold from the chest would be punished for eternity. The only way to lift the curse was to return all the Aztec gold pieces to the chest and a blood debt repaid to the heathen gods. Ultimately, the treasure of Cortés would end up in the caves of Isla de Muerta, an island of the dead that could only be found by those who knew where it was. According to legend, after a ship carrying the treasure ran aground on the island, killing all but one of its crew, the lone survivor hid the treasure ashore before dying himself. Ever since then, the dark magic of the treasure cursed the island itself over time.

There the treasure remained, and became one of many legends in the Caribbean. The voodoo mystic Tia Dalma appeared to have been aware of its existence, particularly when she gave a veiled warning to a young Jack Sparrow, shortly after Jack's adventure involving the spirit of Cortés. It would also be a matter of discussion several times in Jack's young adult life.

Quest for the Aztec Gold

“See, three days into the venture, the First Mate comes up to him and says everything's an equal share. That should mean the location of the treasure too. So, Jack gives up the bearings. That night, there was a mutiny.”
―Joshamee Gibbs to Will Turner concerning Jack Sparrow[src]

Captain Jack Sparrow, not swayed by the tales of the curse, intended on finding the treasure of Cortés aboard the Black Pearl. Jack had heard rumors that the treasure was cursed, but luckily for him, Hector Barbossa and his crew marooned him before he could take his share of the gold. Upon first hearing about the curse from Jack, the crew ended up not believing in the curse, with Barbossa himself having said "Ridiculous superstition!"

“I hardly believe in ghost stories anymore, Captain Barbossa."
"Aye. That's exactly what I thought when we were first told the tale. Buried on an island of dead what cannot be found, except for those who know where it is. Find it, we did. There be the chest. Inside be the gold. And we took them all.”
―Elizabeth Swann and Hector Barbossa[src]

Using the bearings acquired from Jack Sparrow, Captain Hector Barbossa and his crew were able to find Isla de Muerta. There, they found the stone chest and, along with Barbossa's pet monkey, Jack, summarily stole all 882 pieces of the Aztec gold, an act which the crew would later regret. Captain Barbossa and his crew would then spent all 882 pieces of the Aztec gold on drink, food and pleasurable company. Soon afterwards, the crew realized that they fell under the curse, suffering a living death in which they cannot feel or taste anything, and when they step into the moonlight, they become walking skeletons. Finally aware that it was the Aztec gold pieces that placed the curse upon them, Barbossa's crew returned to Isla de Muerta to find a way to lift the curse and end their punishment. There, they found out that the curse could be reversed only when every last piece of the Aztec gold was returned to the stone chest from which it came.

It wasn't until Bootstrap Bill Turner- the sole member of the Black Pearl's crew who remained loyal to Jack Sparrow -was sent to the depths did the crew learned of an additional requirement: that all who stole from the chest had to pay the heathen gods in blood, which now seemed impossible with Bootstrap lost to them. But a chance of hope lied on Turner's child, who had both his gold medallion and Turner blood in his veins. Thus, Barbossa's crew set about, attempting to reclaim all 882 pieces of the treasure.

“Here it is! The cursed treasure of Cortés himself. Every last piece that went astray, we have returned. Save for this.”
―Hector Barbossa to his crew[src]

Ten years had already passed since the cursed crew started their quest, having collected all but one of the gold pieces and had already given their blood to the gold. However, the crew still needed the last coin as well as the blood of Bootstrap Bill Turner from his only child. Days after Barbossa's crew led an attack on Port Royal, the Black Pearl arrived to Isla de Muerta. At this point, Barbossa's men had obtained the final Aztec gold medallion from Elizabeth Swann, whom they believed to be a descendant of Bootstrap Bill. Standing with the treasure in the caves of Isla de Muerta, Barbossa used Elizabeth to perform the blood ritual to lift the curse. However, after the ritual was performed, the entire crew didn't feel any different and realized that Elizabeth was not the child of Bootstrap Bill. The crew then began to argue amongst themselves on their unsuccessful attempt to lift the curse until Barbossa realized that Elizabeth had taken the medallion and escaped to the Interceptor. With the help of their old, left for dead captain Jack Sparrow, the crew was able to catch up with the Interceptor and retrieved the medallion.

By the time the Black Pearl returned to Isla de Muerta, Barbossa's crew had Will Turner, the true descendant of Bootstrap Bill Turner, as their prisoner. Entering the caves of Isla de Muerta, Barbossa once again aimed to lift their curse, this time with the intention of killing Will Turner and using his blood in the ritual. But before they could perform the ritual, Jack Sparrow interrupted, warning Barbossa's crew that the HMS Dauntless was offshore waiting for them. Upon this revelation, Barbossa sent all of his crewmen for attack, save for three men.

Barbossa, Will, and Jack waited in the caves for the slaughter to end, until Jack tossed Will a sword to fight Barbossa's men, while Jack dueled with Barbossa. During their fierce battle around the treasure cave, Jack revealed to Barbossa that he was cursed; having secretly palmed a piece of the Aztec gold. Though they were both immortal, Jack and Barbossa continued their fight through the caves. After Will defeats the pirates, with the help of Elizabeth Swann, Jack cuts his hand, putting his blood on his piece of the gold, and threw his coin to Will. Jack then shoots Barbossa in the heart just as Will dropped the last two gold pieces, with his blood on his coin, onto the chest, thereby lifting the Aztec curse. Human once more, Barbossa dies.

After the Curse was Lifted

Back on the Dauntless, Barbossa's crew reverted to normal and surrendered to the Dauntless crew, who survived the battle in victory. Although the surviving members of Barbossa's crew were captured by the British Royal Navy, some would later escape and returned to Isla de Muerta, where they became cursed once more, vowing revenge against Jack Sparrow. At some point in time, Barbossa's pet monkey Jack would appear in the cave, where he would take a piece of the Aztec gold and became cursed once again.

“What with the Isla de Muerta going all pear-shaped, to be reclaimed by the sea and the treasure with it.”
―Joshamee Gibbs to Jack Sparrow[src]

Some time later, the entire island of the dead was swallowed into the sea, taking all the treasure along with it, effectively vanishing from the face of the earth. At some point after becoming captain of the Black Pearl once again, Jack Sparrow's crew visited the island to see if they could get the treasure. But as the island was taken by the sea, there was no such luck. Only Barbossa's monkey Jack survived this ordeal and found itself aboard the Pearl.

The Treasure of Hernán Cortés was said to be found within Isla de Muerta, an island of death that could only be found by those who knew where it was. Originally given to Cortés as blood money by the Aztecs, it consisted as a large stone chest with Aztec writing filled with 882 identical pieces of Aztec Gold.

Legends tell that the Aztec curse bestowed by the Heathen Gods punished any who stole from the stone chest. Those who fell under the curse would have achieved immortality, thereby becoming invulnerable. Nevertheless, the curse made the greedy beholders feel nothing, whether it was food or anything relating to their lust. When the cursed individuals step into the moonlight, they turn into walking undead skeletons.

The curse only affected the individuals who specifically took the coins from the chest. When a cursed person takes a coin from the chest, no new curse has been given. This is particularly noted after Hector Barbossa used Elizabeth to lift the curse when, after returning the coin, he grabbed it straight from the chest and gave it to Elizabeth. 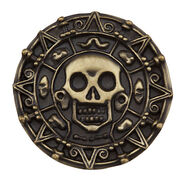 Retrieved from "https://disney.fandom.com/wiki/Treasure_of_Cort%C3%A9s?oldid=1010917"
Community content is available under CC-BY-SA unless otherwise noted.