Jake and the Never Land Pirates
"Treasure of the Tides"

"Treasure of the Tides" is the second segment of the thirty-fourth episode of season 2 of Jake and the Never Land Pirates.

Izzy joins Marina, Stormy, and the mermaids to find the "Treasure of the Tides" held at Hidden Cove, Izzy gives her pixie dust to Jake, Cubby, and Skully who are journeying to the cove on foot. Unknown to Izzy and her mermaid friends, Captain Hook was spying on them along with Mr. Smee set sail to Hidden Cove. Izzy and the mermaids soon become aware of the captain's plot but Hook ordered Sharky and Bones to block the Mermaid Lagoon using the Jolly Roger to prevent Izzy and her friends from perusing after Hook. But the two pirates bumbling were no match for Lucille the Seal who was able slip pass them and recruit the help of two blue whales to force the Jolly Roger out the way and allow Izzy and the mermaids to catch up to Hook and Mr. Smee.

While Captain Hook and Mr. Smee tried to keep the lead to the Treasure of the Tides. A large school of seahorses block the greedy Captain Hook's path. Mr. Smee informs the captain that the seahorses are gentle creatures but are easily startled,giving Hook an idea to keep Izzy and the mermaids at bay spooking the sea creatures toward Izzy and the mermaids Hook could beat them to the treasure. But Hook didn't count on Izzy's quick wit like in the (episode "The Seahorse Roundup") Izzy, Marina, and Stormy began to sing a lullaby to calm the seahorses down so they could safely pass.

Hook and Smee reached Hidden Cove to find the Treasure of the Tides and tried to pry the throne from a rock Izzy and the mermaids tried to stop Hook but they were powerless to stop him until Jake, Cubby, and Skully reach Hidden Cove with Izzy's Pixie Dust to turn the tide on Hook and Smee. The mermaids decide to make Izzy an honorary mermaid. Later that night took part in the celebration and the crowning Izzy "Mermaid of the Year". 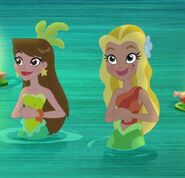 This is the best thing that's thing that ever happened to me tonight. 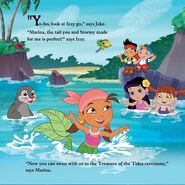 Add a photo to this gallery
Retrieved from "https://disney.fandom.com/wiki/Treasure_of_the_Tides?oldid=3949224"
Community content is available under CC-BY-SA unless otherwise noted.