Able to walk and move their branches

Tree Folk are sentient trees, featured in the Adventures of the Gummi Bears episode "Day of the Beevilweevils".

After Beevilweevils destroy their Gummiberry bushes, the teenage and adult Gummies travel to the deserted Gummi colony of South Gumton in order to find a sapling to replace the bushes.

South Gumton being located in dangerous Fangwood Forest, the bears discover the disgruntled Tree Folk, who had once lived in symbiotic harmony with the Ancient Gummies of South Gumton until the bears had to abruptly flee from the humans during the Great Gummi Exodus a little over 500 years ago.

Having felt abandoned by the Gummies, left alone without a reason, without proper care, and in an inescapable and nearly waterless valley, the Tree Folk eventually dwindled in numbers, growing bitter towards their former allies.

When Artie Deco, Gruffi, Grammi, and Zummi Gummi are enslaved by the trees in a failed attempt to rescue Tummi and Gusto, they all witness Tummi risking his life for the precious Gummiberry bush sapling.

Touched by the commitment toward a plant, the Tree Folk come around to seeing that their perspective was tainted by a misunderstood past.

Gruffi restores the valley's water flow, and vows to return reglarly in order to check in on the Tree Folk, while the trees in turn take care of the newfound sapling, now planted near the stream in South Gumton, beginning once again a symbiotic relationship between the two species.

The Tree Folk and the Great Gummies, living togther in harmony 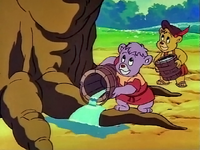 It was a caring give-and-take... 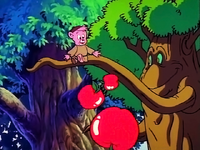 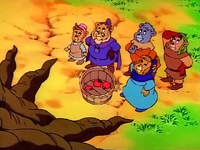 ...fled to New Gumbria without any words of arning to the trees

Retrieved from "https://disney.fandom.com/wiki/Tree_Folk?oldid=4494604"
Community content is available under CC-BY-SA unless otherwise noted.