The Tree of Life is a 145-foot (44 m) artificial tree that has served as the icon of Disney's Animal Kingdom at Walt Disney World Resort first opened at the park on April 22, 1998.[1]

Inspired by the fictional tree of the same name, the Tree of Life features approximately 325 carvings of existing and extinct animal species carved on its trunk and surrounding roots.

Engineered from a refitted oil platform and based on the natural forms of baobab trees, the Tree of Life is located on Discovery Island, roughly in the center of the park. Its leaves are made out of kynar.[2] At the structure's interior base is a 400-seat arena that hosts It's Tough to Be a Bug!, a 3-D film attraction based on A Bug's Life.

When the park opened, the Imagineers wrote this fairy tale to explain the tree's origins:

One day, our vegetation would grow on Discovery Island. There were trees, shrubs, flowers, and birds. It was a barren piece of land. Then, one day, a tiny ant planted a seed and made a wish. He asked for a tree to grow ― a tree large enough to provide shelter for all the animals.

This original ant can be spotted through a knothole hidden along the paths around the tree.

The Tree of Life Awakens is a series of projection mapping shows that debuted on May 27, 2016, as part of the park's new nighttime operating hours.[3] A media preview of the show was presented on April 19, 2016.[4] Four presentations are featured throughout the evening, which has been named on a soundtrack release:

In addition to the four shows, the tree's animals will also occasionally combine.

In 2019 to promote the photo-realistic remake of The Lion King, a new Lion King show was added to the lineup. This was followed by a series of holiday segments and a special New Year's Eve countdown presentation hosted by the shamans from the original version of Rivers of Light.

List of Animals carved on the Tree of Life

Roy E. Disney standing in front of the Tree of Life in March 2003.

Primatologist Jane Goodall with the carving of David Greybeard

The Tree of Life in Disney Animal Kingdom Explorers

A Tree of Life fridge magnet.

Another Tree of Life fridge magnet. 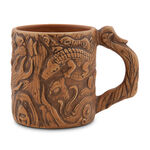 A Tree of Life souvenir mug.

The lake surrounding the tree.

The tree as it appears in Disney Magic Kingdoms

Animals carved on the Tree of Life