Relaxing, romantic moments with each other, performing with Powerline

Each other (husband and wife)
Treeny and Wendell are a couple of minor background characters from the 1995 feature film A Goofy Movie. They are a married couple who appear multiple times in various places throughout the movie.

Treeny and Wendell first appear during the performance of "On the Open Road", wherein the two are seen driving down the highway in their little blue car that is far too small to properly accommodate Treeny's rather large stature. This is likely why Treeny is first seen frowning as her husband begins to sing about how the two are looking forward to having "just a week of rest and relaxation" ahead of them. Once Wendell sings this, Treeny perks up and gives a hearty "Yeah!" in agreement. As she proceeds to affectionately rub her husband's head, Wendell continues to sing "And the odd romantic episode" in response to his wife's affection.

This activity of theirs is noticed by Max Goof, who rides with his father Goofy in their own car as they pass by the couple on the highway, with Max commenting how their behavior, to him, is "Very odd!"

By the song's end, the two are seen joining everyone on the road in excitedly singing the final lines of the song.

Much later, Treeny and Wendell are seen again in Los Angeles at the concert of popular rock star Powerline. Wendell is seen as one of Powerline's roadies loading some trunks and instrument cases into the loading dock of the concert hall. From these cases emerge Max and Goofy, who snuck inside the concert so that they could get onstage with Powerline to dance with him (as Max had promised a number of people back home that he would). When exploring backstage, Max and Goofy get separated. While Max is chased by a security guard, Goofy accidentally walks in on Treeny as she is changing inside her dressing room.

Outraged by the intrusion, Treeny screams and punches Goofy in the jaw, sending him out of the dressing room and falling into a machine that Powerline had previously used to first appear onstage. With Goofy and, eventually, Max joining Powerline onstage, the two impress him with their dance moves enough that Powerline allows them to join him for the remainder of the song, "I2I", during which Treeny soon appears onstage from the same machine and now sporting a new electrifying outfit, revealing her to be Powerline's secondary vocalist.

As Powerline, Treeny, and the backup dancers continue to sing, and as Max and Goofy dance with Powerline, the performance of "I2I" is a success and the crowd goes wild.

Wendell as a roadie at Powerline's concert in Los Angeles. 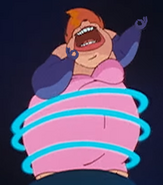