The aspiring mystery writer Mickey Raymond (Margot Kidder) travels to Malta to research her first novel and falls in love with a handsome, mysterious American (Robert Hays). She is drawn into a conspiracy both fuelled by her vivid imagination and real-world drama. David Suchet plays a local police official who seemingly is one step behind events. Raymond's odd luck leads her to become embroiled in an international plutonium smuggling ring and comedic chaos ensues.

The film was produced by Walt Disney Productions but not promoted as such, due to its adult themes. Trenchcoat, Never Cry Wolf and Dragonslayer are widely regarded as the films that led to the launch of Touchstone Pictures.

As of March 22, 2011, Trenchcoat was available on iTunes and Amazon.com for digital rental, with the Walt Disney logo being attached to the film for the first time since its theatrical release.

The film was a box office failure, earning a total of $4,304,286 domestically. Siskel and Ebert named it one of the "Stinkers of 1983". It garnered a 3% fresh rating on Rotten Tomatoes. 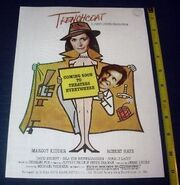 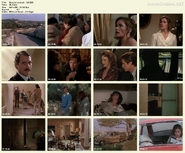 Retrieved from "https://disney.fandom.com/wiki/Trenchcoat?oldid=4036481"
Community content is available under CC-BY-SA unless otherwise noted.