This article is about Trevor Slattery. For other characters who use the same title, see The Mandarin (disambiguation).

Marvel One-Shot: All Hail the King

The Mandarin from Marvel Comics

“You know who I am, you don't know where I am, and you'll never see me coming.”
―Trevor Slattery

During his early life lived with his mother in Liverpool, England his dream was always to be a world renowned stage actor, and his mother often took him to the theatre to help fuel his passion for the stage.

"The Mandarin" is the sinister head of the terrorist organization known as the Ten Rings, from which all the acts of extreme terrorism plaguing the world appear to emanate. Although he is reclusive, "The Mandarin" wields great power and makes his presence known by striking fear in the government and the populace through his brazen plans of attack. It is revealed, however, that the terrorist known as "The Mandarin" is nothing more than a front created by Aldrich Killian, as a means of covering the latter's illegal activities. In the final battle between Aldrich Killian and Tony Stark, Killian declares himself as the real "Mandarin" having masterminded the events that would lead to the attack on Tony's residence as well as Pepper's abduction. After the events in which Killian was killed, Trevor was apprehended by the authorities for assisting Killian's organization as well as his portrayal of the supposed terrorist leader.

All Hail the King

Inside prison Trevor Slattery was treated as a celebrity and had his own personal servant. Jackson Norris - a secret member of the Ten Rings - posed as a journalist wanting to give Trevor an interview. After getting some background on Trevor's past life as a failed actor, Jackson eventually revealed himself as a member of the real Ten Rings, sent to break Trevor out of prison. He also reveals that the leader of the real Ten Rings wanted to see Slattery and get revenge for mocking him.

Trevor returns in this movie.

Trevor Slattery as The Mandarin.

As seen on a poster.

As seen on a Japanese poster.

As seen on a Spanish poster. 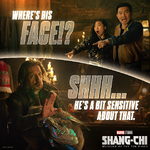