Fenn Rau has been called by Kanan for a private discussion. He begins by showing him the Darksaber that Sabine recovered on Dathomir. Fenn recognizes it and brings up the legend of Tarre Vizsla, the first Mandalorian ever inducted into the Jedi Order. According to the story, when Tarre Vizsla passed away the Jedi kept the Darksaber in their Temple until it was liberated by members of House Vizsla. For generations they used it to unify the people and strike down those who would oppose them. Those who wielded the Darksaber ruled Mandalore. Fenn is somewhat overwhelmed to see this weapon and imagines Sabine was excited to recover it, since she is a descendant of House Vizsla. However, according to Kanan she gave it to him for safe keeping and has not mentioned it since. This makes Fenn realize that she does not want the responsibility that comes with the Darksaber. He then stands up and makes a proposition to encourage Sabine to wield the Darksaber. If she is successful, she could unite the most powerful houses in all of Mandalore. Raise an army under her leadership to the Rebellion's cause. Apparently, Sabine does not want anything to do with the Darksaber or her family, despite what she could accomplish. According to Sabine, she has some issues with her family and believes she will never be accepted as the leader of her clan. Despite all her rejections and family history, everyone manages to convince her.

Kanan, accompanied by Ezra, decides to train Sabine somewhere away from the base. They set up camp and start training with sticks called "Training Sabers". Before they start using the real swords, Kanan wishes to see Sabine's technique. Sabine feels confident that she can handle fighting with a stick, but soon as they start to fight, Kanan easily bests her and she is beaten. Sabine is ready to go again, but Kanan tasks Ezra to teach her the forms before she can try again. Days pass, and although it has been tough Sabine is slowly making progress, but Kanan remains concerned about her. To hear from Hera, it was like he was not so sure about training Sabine. Soon, Ezra and Sabine started doing some basic combat training. Sabine manages to keep up, but Ezra eventually beats her just as Fenn shows up with their supplies. While everyone takes a break, Fenn presents Sabine with a gift: Mandalorian Vambraces, featuring a grappling line, paralyzing darts and a repulser. The things she needs to combat the abilities of a Jedi. With this extra gear, Sabine challenges Ezra to another duel and this time she beats him. However, Kanan is not impressed. Sabine tries to take him down with her new tools, but ends up getting beaten once again. With his blade against her neck, Kanan lectures her how training and discipline achieves victory and survival not the usage of tricks. Sabine has had enough and storms off in frustration.

Ezra follows Sabine and tries to talk to her. Sabine admits that she does want to wield the Darksaber but does not want to have everything that comes with it, such as her family. Sabine tells him that her family sees her as a disgrace to them and a traitor. She does not see how she can go back to face them or lead her people. Ezra apologizes for bringing it up after Sabine says she does not want to talk about it anymore. Before he walks away, he brings up the fact that she still has her parents to go back to, unlike him. Back at the camp, Kanan is speaking with Hera about what happened. He admits that trying to teach Sabine is becoming more and more difficult. While she is a capable warrior, Kanan believes she cannot find balance within herself which is making him reluctant to let her fight with the Darksaber. He does not want to risk her getting hurt, which is why he is having her fight with sticks. Hera tells Kanan that what he is failing to see himself is that Sabine has already been hurt by her family and she is trying to hide it from him. She also believed that keeping her away from the Darksaber is only making her lose her confidence. Hera pleas with Kanan to allow Sabine to have the Darksaber and help her face her demons. Despite his concerns, he agrees to do it.

Later, night has fallen and Sabine has not yet returned to the camp. This leaves Ezra worried but Fenn is certain she will return. Eventual, she does and walks up to Kanan. The two of them apologize to one another, and then Kanan presents her with the Darksaber. Then, they begin training, and this time they use the real swords. They start off with blocking and she does well. Next, they try fencing, using the forms that Ezra taught Sabine. They start off with a slow attack, until then it moves up to being fast. Sabine struggles but keeps going. She manages well, and every time she gets beaten she tries again. Pretty soon, she starts to get aggressive as Kanan starts to mock her about her sufferings and running away from both the Empire and her family. She tries to deny it, but eventually confesses. The true reason she ran away was so she could save her family and people. When she was a cadet she helped build weapons that were used against her people, and feels very guilty about it. She helped the Empire enslave her people. All this made Sabine even more and more aggressive and even more depressed until she finally beat Kanan and had him at her mercy. Sabine did try to end what she had done, but her family neglected her and chose the Empire. They deserted her.

With the truth finally out, Sabine spared Kanan and burst into tears. Sabine's people became prisoners to the Empire by weapons of their own making, and it was up to her to save them. However, she remains uncertain that she can do it, but her friends give her the assurance that they and the Rebellion will stand by her side no matter what course she will eventually choose. 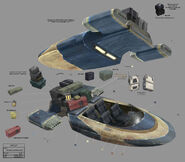 The legend of the Darksaber

Sabine alone in her cabin

"History lesson: The Jedi won the war with Mandalore!"

Training with the Darksaber

Retrieved from "https://disney.fandom.com/wiki/Trials_of_the_Darksaber?oldid=4318008"
Community content is available under CC-BY-SA unless otherwise noted.