This article is about the weapon owned by Poseidon. For other uses, see Trident (disambiguation).

Hercules
Pirates of the Caribbean: Dead Men Tell No Tales

Hercules
Once Upon a Time

Aid Poseidon to control the oceans

Magical control over water
The Trident is the godly weapon of Poseidon, god of the seas. This powerful weapon allows him to control the seas and exert vast magical influence over water in all of its forms.

The trident grants whoever possess it control over the oceans, rivers, and water in all of its forms. It's possible to shift water into its various forms such liquid, gas, solid and create atmospheric hazards such as storms and vortexes. Also, the trident is powerful enough to pierce a god's skin.

Poseidon was briefly seen on Mount Olympus with the other Gods holding his Trident.

Although the trident's actual manufacturer is unknown, the trident is Poseidon's iconic weapon for eons until it was stolen by Hades in his plans to take over Athens by shifting the River Styx. Hercules later returns the trident to its rightful owner and the only time it shifted ownership was when Triton, Poseidon's son, was in temporary ownership of the trident.

In the stage musical reimagining of The Little Mermaid, the popular theory of Poseidon as the father of King Triton and Ursula is accepted, and thus Triton's Trident is said to be Poseidon's Trident which Triton inherited.

In the series, the Trident is once again identified with the Little Mermaid item; it belonged to Ursula's father Poseidon. The King of the Seas, he used it to rule over his domain. When discovering that his daughter wanted to run away with the aid of one Captain Hook, he used his trident to enchant a sea-shell which would take away her singing voice and prevent her from leaving him. After Ursula learns of his betrayal, she takes his trident and gives herself more power, consequently turning her mermaid tail into those of an octopus.

The Trident is the main artifact sought on by the characters of the movie. At the climax, Henry Turner gets ahold of the Trident, and uses the Trident's magic by destroying it to eradicate Captain Salazar's undead crew (also reverting his undead form to his mortal form to reflect Salazar's original flashback before he died) as well as undoing Will Turner's curse, in turn. It is also possible that destroying the Trident undid Davy Jones' death during the events of At World's End and restored Davy Jones as captain of the Flying Dutchman.

The Trident in the TV series

Ursula holds the Trident in 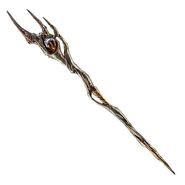 Poseidon holding the trident in Pirates of the Caribbean: Dead Men Tell No Tales. 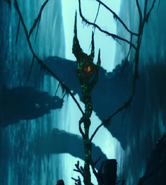 Salazar with the Trident.