This article is about the weapon owned by King Triton. For other uses, see Trident (disambiguation).

Voyage of the Little Mermaid
Magic, Music and Mayhem

To equip its wielder with magic

The Trident is a magical weapon that is featured in The Little Mermaid franchise. It serves as the personal weapon of King Triton. It has vast magical abilities capable of controlling the sea and its spoils, and thus has been strongly desired by malevolent forces, most notably Ursula.

The trident is shown to have various applications, depending on the will of the user. When its power is activated, it illuminates with a bright, shining golden or blue glow (green in Morgana's case) and is heard to make a deep humming sound punctuated with high-pitched melodious tunes. Since whoever wields it has command over the oceans, it affords tremendous power.

Most commonly seen is its ability to fire destructive energy bolts. These energy bolts, however, must be fired immediately upon the ready, or they will cause the built up energy to backfire on the user. This is ultimately how Ursula was killed, as she attempted to fire an energy ray at Ariel, but was impaled seconds before she could fire by prince Eric and one of the ships, causing the energy to backfire on her. Though these energy bolts may destroy many things, the trident is intended to protect Atlantica and the ocean and as a result, its destructive power is incapable of violating any commitments. Such as Ariel's deal with Ursula which was willingly, albeit reluctantly, signed by a member of the royal bloodline, making the contract legal.

Triton has also used it to summon rain storms, and transform his daughter, Ariel, into a human. He is also seen creating a rainbow in the first film, and disintegrating the sea wall in the second film. Ariel uses it herself in one episode of the television show, to thaw dinosaurs that have been trapped in a glacier, and it is revealed that the trident is activated simply by the will of the user. When the trident is in Ursula's possession, she grows to gigantic size and creates a giant whirlpool in the ocean that has such force that it raises sunken ships from the ocean floor (which Eric uses to kill Ursula). In the television series, the trident can be mentally controlled at Triton's whim and called to him as well.

In The Little Mermaid II: Return to the Sea, Sebastian claims that only members of the royal bloodline can remove the trident from its resting place. However, this is contradictory to the rest of the franchise; for instance, Urchin in the TV series was able to lift the trident out of its resting place at one point despite him not being related to Triton at all.

Closeup of a surge

Ariel powering up the Trident

Morgana with the Trident in her clutches 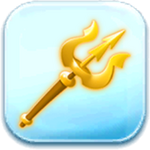