Being rich, parties, boys, being with her friends

Being broke and bankrupted

Mr. St. Blair (father)
Trinket St. Blair is a supporting character of the animated series Pepper Ann. She is a rich, spoiled girl who attends Hazelnut Middle School with Pepper Ann and her friends and is usually accompanied by Cissy Rooney.

Trinket has lived in Hazelnut most of her life with her best friend Cissy Rooney. Her first interaction with Pepper Ann Pearson was when her family moved back in. However, it was only to make sure that she did not challenge her and Cissy's status as the "reigning queens of kindy-garten [kindergarten]". Upon seeing her, and mocking her appearance, Trinket left satisfied. Since then, she and Pepper Ann have become frenemies of sorts. While she will occasionally hang out with Pepper Ann, or even take part in some of her schemes, the two of them never see eye to eye.

In "Bye, Bye Trinket", Trinket is accepted into the prep school of her dreams. After accidentally getting coaxed by Nicky Little, Pepper Ann is convinced that Trinket wanted to be her friend this whole time and tries to set up a going away party for her. Despite Pepper Ann's efforts, Trinket shows little interest in wanting to be friends with her. When she comes back from the prep school, due to poor phone reception, Trinket forgives Pepper Ann and is okay with her throwing a return party. Trinket and Pepper Ann usually take advantage of each other, ironically, due to the former's wealthy status.

In "The Finale", it is established that in the series' version of 2013, that Trinket becomes a political aid to President Mark Hamill.

Trinket is a stereotypical, snooty, high class, ditzy and shallow popular girl. She tends to be very judgmental of others and will give "advice" on how to improve their image. Due to her upbringing and high standards, she sometimes has a bit of a short temper and easily gets annoyed at others for what she perceives as ineptitude. However, she can be reserved, pleasant, friendly and at times displays a sense of foresight, empathy and self-awareness that other people, like Pepper Ann, lack. While she can be bossy with Cissy, she does consider her her best friend, showing that she does have a heart of gold and some people she cares about.

Trinket is a tall and slender Caucasian girl with long, pillow-like blonde hair that reaches down her back and covers one of her eyes, both of which are defined. She wears a pink shirt with a blue dress over it. She wears violet stockings and, oddly enough, brown hiking shoes. 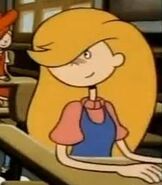 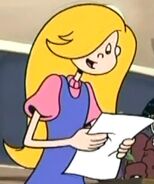