The Raider (father)
Trip is a character from the PKNA comic series. Trip is The Raider's son, very smart and precocious to his age, and most of the time behaves as a brat, but deep down he loves his father.

While Trip mostly appears in short side-stories, but he is part of the main story of issue #34 Niente di personale (Nothing Personal). When the Raider dies during a mission, the Organization adopts him to train him as the Raider's replacement, known as the Griffon. The Griffon blames the Duck Avenger for his father's death and uses time travel to manipulate events and cause the Avenger to become an outlaw and the Organization to handle control of the temporal flow. Odin Eidolon brings Trip from a previous point of his timeline and puts him on the Duck Avenger's care. The Duck Avenger and Trip are hunted by the Gryphon and Newton, until the Raider appears revealing that he left his mission when he found Trip was gone (therefore changing the whole event of his death). Trip happily hugs his father and tells the Gryphon "I'll never be like you!" which undoes the Gryphon's existence and all the changes he made to the timeline.

Trip and his father. 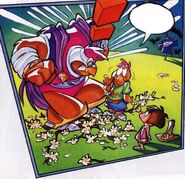 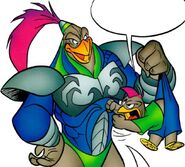 Trip and his evil adult self, the Gryphon.