Chatting online, playing video games with Rex, hanging out with Reptillus Maximus, being played with

Lotso, Bonnie not playing with her as a dinosaur (formerly), the Battlesaurs battling toys, Forky breaking her computer

“Just a dinosaur down the street.”
―Trixie

Trixie is a blue plastic toy Triceratops that appears in the Disney•Pixar Toy Story franchise, first appearing in Toy Story 3. She is one of the toys owned by Bonnie Anderson and appears to be of the same toy line as Rex.

Trixie usually chats online with someone who goes by the name "Velocistar237" (presumably a Velociraptor toy). She is often found playing video games with Rex and even made a profile for him as seen in Hawaiian Vacation. Due to her rather older appearance (the paint on her horns and claws are beginning to peel), it can be assumed she is one of Bonnie's older toys. She is also shown to be one of her favorites, even writing her name on her front left hoove as seen in Toy Story That Time Forgot.

Trixie is first seen after Woody is taken to Bonnie's house by Bonnie, who, having just returned home from Sunnyside Daycare, places him with her toys for a tea party. As Bonnie leaves to go to the bathroom, Woody tries to ask the toys where he is, but Mr. Pricklepants shushes him so he can "stay in character". When Buttercup introduces himself, Trixie chimes in as well, only for the both of them to get shushed (which then leads to the triceratops and hedgehog to get in a shushing contest, much to Buttercup's dismay). Woody interrupts them and says he doesn't know where he is, and Trixie (believing he is referring to what the setting is in Bonnie's playtime) says they're either in a cafe in Paris or a coffee shop in New Jersey, with her just getting back from the doctor with "life-changing news". Buttercup then explains to a confused Woody they do a lot of improvs in Bonnie's room. Bonnie soon returns, and she soon introduces a rag doll named Dolly as a "scary witch". She grabs all her toys and hides in her toy basket, pretending to hide from the witch. But the witch "finds them" and she tips over the basket with all of them spilling out. Bonnie once again leaves to make a "spaceship" so they can escape the witch. The toys stand up and Trixie tells Woody he's doing great, but a frustrated Woody just wants to know how to get out here, only for him to be introduced to Dolly and the Peas-in-a-Pod. Bonnie returns with a cardboard box with paper plate wings and scoops the toys into it. She brings them to her bed and catapults them with her bedsheets onto the bed. As she jumps onto it and snuggles with her toys, Woody begins to warm up and actually begin to like her.

That night, however, while Bonnie (and the other toys, who sleep in her bed along with her) are sleeping, Woody sneaks out of her bed and looks for her backpack. He finds it hanging on her door, and after quietly moving a chair towards it, finds her address written on it. Bonnie's toys, who heard him, ask him what he is doing, with Trixie shocked he's leaving. Woody explains that he has to leave since he belongs to somebody else. He asks them if they have some sort of map, to which Dolly points to Trixie, who (after stretching) says she'll fire up the computer.

Later, the toys are using Bonnie's computer for directions when Trixie receives an email from somebody named Velocistar237 (with a message reading: "U there? I made it 2 the Dark Fortress!!"). When Woody asks who it was, Trixie quickly pushes him to the side to exit out and insists that it's a dinosaur toy from down the street and it's nothing. Woody finishes typing up Andy's address and tells Trixie to enter. It turns out Bonnie's house is right around the corner to Andy's house, much to the group's happiness. As Woody is about to walk through the dog door, he tells Bonnie's toys if they ever make it to Sunnyside, to tell Andy's toys that Woody made it home. The toys are shocked that they came from Sunnyside, with Trixie asking him how he escaped. Woody laughs and says it wasn't easy, but he soon asks what does she mean by escape. Mr. Pricklepants explains that the daycare is ruled by Lotso with an iron fist. Chuckles, a clown toy sitting by the window, explains to Woody that he, Lotso, and Big Baby belonged to a little girl named Daisy who accidentally left them at a rest stop. After they followed her back home, Lotso discovered he was replaced by another Lotso doll, causing him to harden inside and lie to the other toys that they were all replaced (while Big Baby believed it, Chuckles witnessed the whole thing, but Lotso quickly shut him up). After wandering aimlessly, they found Sunnyside, where Lotso became the ruler of the daycare (while Big Baby was his bodyguard) while Chuckles eventually got broken and found by Bonnie. Woody says his friends are at Sunnyside, but the toys object him going back, with Trixie reminding him of Andy leaving for college.

She is not seen until the end of the movie where Andy donates his toys to Bonnie and spends the afternoon playing with both groups of toys. After Andy leaves and Bonnie goes inside with her mother, the gang then watch from the porch as Andy drives off down the street. As the gang introduces themselves, Trixie is seen chatting with Rex. During the end-credits, Trixie and Rex are shown becoming close by playing video games on the computer. After succeeding in winning a video game, Trixie and Rex high-five one another in victory. They're then seen watching Jessie and Buzz perform a pasodoble to "Hay Un Amigo En Mi", the Spanish version of "You've Got a Friend in Me".

Trixie returns in the fourth installment of the franchise, though with a much smaller role, Kristen Schaal reprises her role.

Trixie is one of the toys that Bonnie chooses for her town game. After Bonnie's first day of Kindergarten, she sees that Woody went with her. Later, she is shocked to see Forky come alive, telling Woody that she has all the questions, and also goes along with the road trip to celebrate Bonnie's first day.

In Hawaiian Vacation, Trixie can be seen amongst Bonnie's toys. She is first seen when Woody asks if everyone has a vacation plan. She along with Rex are planning to work their "massively multiplayer online world play game profiles" for their vacation plans. Until Barbie and Ken arrive unexpectedly, she joins Woody, Buzz along with the rest of Bonnie's toys to recreate Hawaii for Barbie and Ken. Later on, she is seen as the captain when Barbie and Ken go fishing in a toy boat during one of their various "adventures" in "Hawaii". After the credits, she is seen with the other toys working to free Barbie and Ken.

Trixie returns in the Halloween special along with Woody, Buzz, Jessie, Rex, Mr. Potato Head, and Mr. Pricklepants. After Mr. Potato Head disappears at the sleep-well motel and the toys go to find him, Trixie looks down a vent and falls down where she is captured by Mr. Jones. She is later seen again after the other toys are captured and they are locked in Ron's cabinet. After Woody is purchased and Jessie manages to escape and rescue him, Trixie, Woody, Jessie, and their friends are later recovered by Bonnie and her mom.

Trixie returns in the Christmas special. She has a much larger role here, as she is the protagonist. She expresses frustration at never being played with as a dinosaur before she and some other toys are taken away to Mason's house for a playdate. There She is immediately smitten over Reptillus Maximus and participates in the battle against the Battlesaurs. However, she is horrified that Reptillus hurts Mason's toys. Soon Woody and Buzz enter the ring and warn Trixie that Mason hasn't played with the Battlesaurs yet and they don't even know they're toys. After Woody and Buzz are captured by the Cleric and the Goliathon, Trixie goes to get Bonnie and save her friends. Trixie makes her way to the game console to turn it off; however, Reptillus confronts her. However, she is able to persuade Reptillus of the joys of playtime, prompting him to turn off Mason's video game so that he will remember his other toys and saves Woody and Buzz. At the end of the special, she reflects that she has learned to define herself as Bonnie's toy first and foremost, proclaiming that she will be whatever Bonnie needs her to be.

Trixie appears in a cameo in the end of What is Love? where she says no to Carl Reineroceros, who attempted to get in a relationship with her.

Trixie was seen again in What is a Computer?, where she tries to teach Forky how to use a computer, in the end, he ends up destroying her computer, much to Trixie's anger. 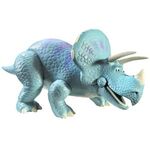 Trixie and Rex playing a computer game together.

Trixie as Captain with Barbie and Ken in Hawaiian Vacation.

"Just a dinosaur down the street."

Trixie with the other toys in Partysaurus Rex.