One of Bonnie's toys

“Just a dinosaur down the street.”
―Trixie

Trixie is a blue plastic toy Triceratops who debuted in the Disney/Pixar's 2010 film Toy Story 3. She is one of the toys owned by Bonnie Anderson, and appears to be of the same toy line as Rex. She is also a supporting character in Toy Story of Terror! and the protagonist of Toy Story That Time Forgot.

Trixie usually chats online with someone who goes by the name "Velocistar237" (presumably a Velociraptor toy). She is somewhat scatterbrained and very zany. She helps Woody find his way back to Sunnyside. In the credits, she is seen to have become close friends with Rex, as they are often seen together and playing on the computer together.

Trixie is first seen after Woody is taken to Bonnie's house by Bonnie, who, having just returned home from Sunnyside Daycare, places him with her toys for a tea party. Trixie and Buttercup welcome Woody, while Mr. Pricklepants orders them to be quiet.

She is later seen next to Woody while he uses Bonnie's mother's computer. She is helping Woody determine the distance and route path between Bonnie's House and Andy's house when she receives an IM. Trixie has been instant-messaging someone named Velocistar237, who has left a message saying: "U there? I made it 2 the Dark Fortress!!" When Woody asks about this, she quickly exits it out, saying that it's just a dinosaur down the street and nothing important.

After Andy donates his toys to Bonnie, Trixie is seen welcoming Rex to Bonnie's other toys and becomes close friends with Rex. During the credits, the two dinosaur toys are seen playing a video game on a computer in one scene. They are also seen side by side as the toys enjoy watching Buzz and Jessie perform a pasodoble while "Hay Un Amigo En Mi" is playing.

“You're not wearing any pants. ”
―Trixie warning while whispering to Ken.

In Hawaiian Vacation, Trixie can be seen amongst Bonnie's toys. She is first seen when Woody asks if everyone has a vacation plan. She along with Rex are planning to work their "massively multiplayer online world play game profiles" for their vacation plans. Until, Barbie and Ken arrive unexpectedly, she joins Woody, Buzz along with the rest of Bonnie's toys to recreate Hawaii for Barbie and Ken. Later on, she is seen as the captain when Barbie and Ken go fishing in a toy boat during one of their various "adventures" in "Hawaii". After the credits, she is seen with the other toys working to free Barbie and Ken.

She is first seen when Bonnie, Rex, and Mini-Buzz got home from Poultry Palace. Trixie is seen watching Mini-Buzz skating. Trixie is last seen looking at the plan to get the real Buzz back, although she didn't speak throughout the short.

She also appeared in Partysaurus Rex, although she didn't speak.

Trixie returns in the Halloween special along with Woody, Buzz, Jessie, Rex, Mr. Potato Head, and Mr. Pricklepants. After Mr. Potato Head disappears at the sleep-well motel and the toys go to find him, Trixie looks down a vent and falls down where she is captured by Mr. Jones. She is later seen again after the other toys are captured and they are locked in Ron's cabinet. After Woody is purchased and Jessie manages to escape and rescue him, Trixie, Woody, Jessie, and their friends are later recovered by Bonnie and her mom.

Trixie returns in the Christmas special. She has a much larger role here, as she is the protagonist. She expresses frustration at never being played with as a dinosaur before she and some other toys are taken away to Mason's house for a playdate. There She is immediately smitten over Reptillus Maximus and participates in battle against the Battlesaurs. However, she is horrified that Reptillus hurts Mason's toys. Soon Woody and Buzz enter the ring and warn Trixie that Mason hasn't played with the Battlesaurs yet and they don't even know they're toys. After Woody and Buzz are captured by the Cleric and the Goliathon, Trixie goes to get Bonnie and save her friends. Trixie makes her way to the game console to turn it off; however, Reptillus confronts her. However, she is able to persuade Reptillus of the joys of playtime, prompting him to turn off Mason's video game so that he will remember his other toys and saves Woody and Buzz. At the end of the special, she reflects that she has learned to define herself as Bonnie's toy first and foremost, proclaiming that she will be whatever Bonnie needs her to be.

"Trixie is a perfect playmate for prehistoric playtime! Visit the era when dinosaurs ruled the Earth! Made of rigid, durable plastic and in friendly shades of blue and purple, Trixie features an expressive mouth and movable legs. This gentle Triceratops will feed any child's imagination. Also available: Tyrannosaurus Rex, Stegosaurus, and Velociraptor." 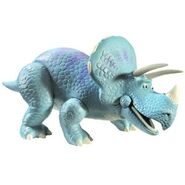 Trixie and Rex playing a computer game together.

Trixie as Captain with Barbie and Ken in Hawaiian Vacation.

"Just a dinosaur down the street."

Trixie with the other toys in Partysaurus Rex.

Retrieved from "https://disney.fandom.com/wiki/Trixie?oldid=2990974"
Community content is available under CC-BY-SA unless otherwise noted.