Overweight female bear, often wears a bow and a tutu

The other Country Bears, Beary Barrington

"Tears will be the chaser for your wine."
Trixie is a sweet, sensitive, overweight female bear who sings in the Disney theme park attraction, Country Bear Jamboree.

She also appears in the 2002 feature film based on the attraction, under the name Trixie St. Claire.

Trixie is an old trouper, a veteran performer. There is nary a sourdough or grubstaker who doesn’t recall her singing and dancing in the rip-roaring music halls of the western frontier. She has been known variously as The Calgary Charmer, Alaska Allurer, Vancouver Vamp, Bewitcher of British Columbia, and Tacoma Temptress. As did so many folks with good sense, she visited Florida and decided to stay. She is now known as The Tampa Temptation. She spends her spare hours thumbing through the pages of her scrapbook and is planning to write a book, "I Bearly Remember". 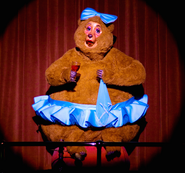 Trixie St. Claire in The Country Bears.
Add a photo to this gallery

Retrieved from "https://disney.fandom.com/wiki/Trixie_St._Claire?oldid=4182233"
Community content is available under CC-BY-SA unless otherwise noted.