“Hidden away inside a computer, exists another world. Its creator designed it for games, but it became so much more. He called it The Grid, a digital utopia filled with infinite possibilities. He built a digital copy of himself named Clu, to create the perfect system. And he relied on the hero, Tron, to keep it free for all programs who lived there. But in his thirst for power, Clu betrayed his creator. Tron fought back, but Clu was too powerful and left him for dead. Clu dispatched his armies and seized absolute control. Now, in a far off corner of the Grid, a young program decides Clu must be stopped. His name is Beck. Could he be the next Tron?”
―Tron

Tron: Uprising is an animated science fiction television series spun off from the Tron film series, which airs on Disney's television channel Disney XD, in the United States. The show premiered on June 7, 2012, and is directed by Charlie Bean, who also acts as executive producer alongside producers Edward Kitsis and Adam Horowitz.

Beck is a young program who becomes the skillful leader of a revolution inside the computer world of the Grid. His mission is to free his home and friends from the reign of the villainous Clu and his henchman General Tesler. Beck will be trained by Tron, the greatest warrior the Grid has ever known. Tron will not only teach Beck the fighting and light cycle skills he needs to challenge this brutal military occupation, but he will be a guide and mentor to him as he grows beyond his youthful, impulsive nature into a courageous, powerful, strong leader. Destined to become "the next Tron", Beck adopts Tron's persona and becomes the arch enemy of General Tesler and his oppressive forces.

Tron: Uprising is set after the events of TRON: Evolution, but before TRON: Legacy. For the purpose of story and character development, which could branch out but not directly conflict with the events portrayed in the movies, video game, or the graphic novel TRON: Betrayal, the series is set in Argon City, located in a part of the Grid far from Tron City.

In this series' timeline, Clu 2 has already taken over the Grid and is asserting his control over more distant areas, including Argon City. The "ISO Wars" is mentioned as being in the recent past, and Kevin Flynn is said to be in hiding.

The series builds up on the background story of Tron, particularly his experiences between Evolution and Legacy. An in-game cinematic in Evolution – which was shown as a flashback in Legacy – shows Tron being overwhelmed by Clu and several Black Guards to give Kevin time to flee. It is implied but that Tron was subdued and injured, then later reprogrammed to become Rinzler.

The series establishes that Tron was indeed injured in the fight with Clu, but was able to escape relatively intact, although weakened and suffering from grievous wounds. He fled to Argon City, later stumbling upon Beck and thus setting the stage for the show. The series still leaves room for Tron to become Rinzler at a later time, before continuing into the events of Legacy.

While in hiding, Tron reverted to an elaborate white-suit/white-circuit design and color scheme reminiscent of his days in the original Grid. In the series pilot, his look switches between this and the look he adapted in the new Grid: An almost completely black suit with very minimal white circuitry (but without the "T" emblem on his chest seen in Evolution and Legacy). The white suit with white circuitry was bequeathed to Beck when Tron started training him to be "the next Tron". Following this, Tron adapted a black-suit/white-circuitry version of his original suit, and uses this mostly while at rest. During field operations, he uses the black suit with minimal white circuitry (with no "T").

Clu's coup, a scene revisited in Legacy and Evolution, was portrayed in Uprising with two major changes: Tron wore his white suit rather than the black one (which itself has more visible circuits in Evolution version of the scene than in Legacy), Dyson and at least nine Black Guards attacked Tron rather than the usual team of four shown in previous accounts.

TRON: Legacy director Joseph Kosinski has stated that he has had no input on the series. 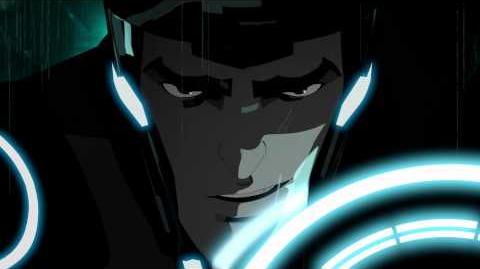 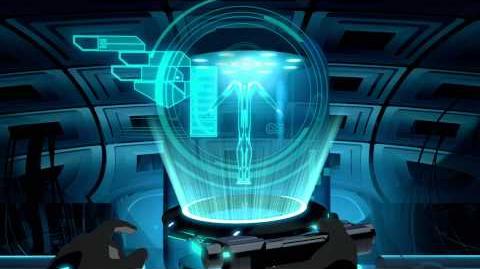 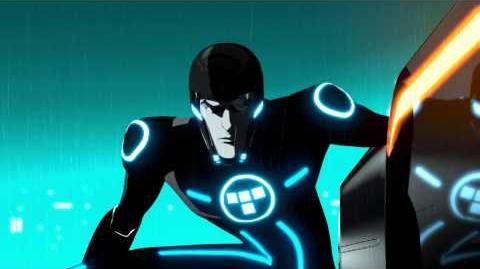 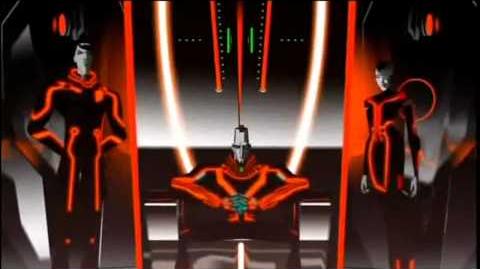 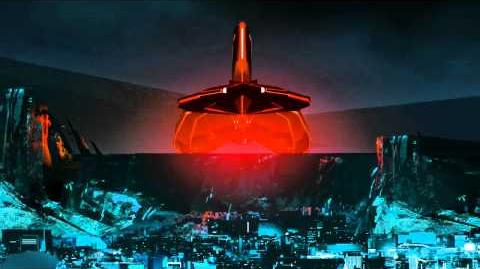 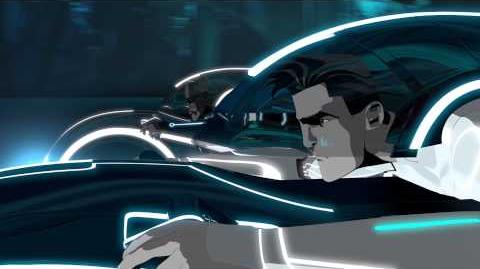 In December 2010, it was announced that Elijah Wood, Bruce Boxleitner, Lance Henriksen, Emmanuelle Chriqui, Mandy Moore, Paul Reubens, Nate Corddry, and Reginald VelJohnson would voice characters in a television series based on the Tron franchise, titled Tron: Uprising. The series features an animation style that mixes 2D animation and CGI animation. The look of the series was inspired by Star Wars: The Clone Wars, ThunderCats, and Aeon Flux.

On January 7, 2013, Storyboard artist Eric Canete has confirmed that the show won't be receiving a second season.[1]

Amid rumors of cancellation, on January 14, 2013 producer Edward Kitsis countered the cancel status stating "“I don’t know what the future [of Tron: Uprising] is now. I know at the present, I can say we need more viewers."[2] despite Disney XD rescheduling the show broadcast to Sunday night/Monday AM Midnight with no rebroadcasting, limiting its viewing audience.

On returning from hiatus, Disney XD rescheduled the show for broadcast on Monday nights at 12:00 AM Eastern/11:00 PM Central with no rebroadcasting, and no advertising to indicate the change. Its live viewing audience is limited though DVR performance is strong. Fans have accused Disney of tanking the show on purpose, as a large number of viewers were left unaware that the show had returned due to the lack of advertising and/or unable to watch due to the timeslot.

Such cancellation consideration by Disney is in line with Disney XD stating they are specifically tailoring their broadcasts to the 2 to 14 year old audience, and currently is succeeding in creating and marketing to that specific target demographic of very young children.[3] over their competition such as Nicktoons in this age category.

The show was moved without notice, rebroadcast, or advertising, causing many fans to accuse Disney of forcing the ratings of the show down so it could be cancelled.

After the last episode aired no more episodes of Tron: Uprising have been aired on Disney XD.

While the shows storyboard artist Eric Canete tweeted that the show was ending; this was later countered by Kitisis's statement As of now, no official decision has been announced by Disney, according to several sources, including the TronUprisingFans Twitter feed, which searches every day for news on the show's ultimate fate. On February 24, TronUprisingFan confirmed that no definitive news on the shows cancellation has yet been found.[4]

On May 9, 2013 it was announced that Disney had reached an agreement with Netflix wherein Tron: Uprising would appear on the streaming service along with four other programs.[5]

After hearing of the possible cancellation, fans suggested the show to smgo.tv[6] As of mid 2013 the show is undergoing a vote on the website if smgo should start funding for a season 2, the goal was set for 2500 votes. In August the set was changed to 15,000 votes (as of August 23, the total was up to 2855). Also on Change.org[7] a petition was created for the show to be brought back, the goal was set for 7500 supporters, with 7400 already signed. As of October 2013, the petition, with a target response of 8,000 signatures, was just 100 participants short of meeting its goal. Upon reaching the votes "we'll take your requests to Disney and present Tron: Uprising as a viable". The set was then changed to 10,000 votes (as of March 25, 2014, the total was up to 9,018).

A music video was released for one of the tracks, Lightbike Battle (3OH!3 and JT Remix). It contains scenes from the as-yet-unreleased final two episodes of the show.

The album includes "Rezolution", a mix by 16-year-old DJ Cole Plante, who appeared at the ElecTRONica event at Disney California Adventure as a guest DJ, in order to promote Uprising and his own upcoming album on the Disney-owned record label Hollywood Records.