Sam, Katherine rejecting him, being poor, being told no

"The duck may swim on the lake, but my daddy owns the lake"
”That’s too damn bad!”
Charles "Trout" Walker is a recurring antagonist in the 2003 live-action film, Holes.

In the book, Charles Walker is described as "loud and stupid". As a result of a wealthy upbringing, Walker is spoiled, rude, self-centered, bigoted, and arrogant. He also has several racist tendencies. He is extremely arrogant and greedy. In class, he does not pay attention at all and seems more concerned about making jokes. He was also known for his foul fish-like smell, hence his nickname "Trout Walker".

At first, Trout Walker is a student with a crush on Katherine Barlow. He finally asks her out, and is infuriated when she denies. He later discovers who her love is when he spies her through the window and sees her kissing Sam, an renowned onion seller. He rounds up his friends and they assault Barlow's school, setting fire and smashing windows with sticks. Barlow runs to the Sheriff for help, but in his drunken state he only tells her to kiss him. Meanwhile, Walker locates Sam in his wooden boat, and quickly gains stead with his motorboat. Once in range, he shoots Sam with his rifle, breaking Barlow's heart. This ultimately causes Barlow to fall to the dark side and become an outlaw.

Seven years later, Trout marries Linda Miller, who used to be one of Barlow's students. Twenty years after Sam's death, Walker finds that Barlow has returned to Old Green Lake, which has now dried up. He points his gun at her, and Barlow retaliates by seizing her own weapon. However, Barlow decides not to fight, and instead throws aside her gun, which Linda picks up. Walker demands to know the location of the loot that Barlow had stolen, but she denies that there is any. Walker sees through her bluff, and Barlow responds that the desert goes on for many miles. She warns that "you, and your children, and your children's children, will dig for the next 100 years, and [Walker] will never find it". Before Walker can reply, a yellow-spotted lizard appears, erecting fear from Linda. Barlow, however, is unafraid of it, and allows it to bite her in an act of suicide. Her last words are, "Start digging, Trout."

Little is known about what happened to Walker and Linda afterwards. Later in the film, they became grandparents to Warden Walker, and Trout forced her to help dig for the treasure Barlow had hidden, even on Christmas Day. 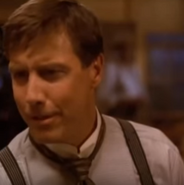 Trout in the Schoolhouse

Retrieved from "https://disney.fandom.com/wiki/Trout_Walker?oldid=4323185"
Community content is available under CC-BY-SA unless otherwise noted.