Kerchak from the original Tarzan novel

Member of the gorilla family (formerly)

Torturing Tarzan and the other gorillas, getting what he wants, leadership

Everything (to an extent), being caged, not getting what he wants, Kerchak

Strength, Speed
Tublat is a monstrous gorilla and one of the main antagonists from The Legend of Tarzan. A rival of Kerchak's, he aggressively tried to take over control of the family, but was quickly banished. With Tarzan now in charge, he seeks to defeat him and assert himself as the leader of the apes. Strangely enough, while the books portrayed Kerchak as being the violent one, but was made more sympathetic by Disney, using the book's portrayal of Tublat as being benevolent, Disney's version of Tublat suffered the complete opposite (he is changed into a villain using the original version of Kerchak's personality).

Tublat is incredibly mean and aggressive. He challenged Kerchak for leadership and tried to win treacherously but was defeated (with help from a young Tarzan) and cast out. He is considered dangerous by all the gorillas. He is based on Kala's husband (and Tarzan's foster father) in the original Tarzan novel. His personality is also very much like the original Kerchak from the original novel. He once took over another gorilla family that Gobu belonged to by killing the leader of that family. But the family (with Tarzan's help) overthrew him and Gobu replaced him. He often calls Tarzan a hairless runt and has no respect for him. He has four toes on his right foot, and this is one way to tell he is in the area.

A violent thunderstorm has Tarzan, Jane, and the rest of the gorilla family seeking shelter in nearby caves, but they have chosen the same cave that the banished gorilla Tublat lives in. Tarzan is no physical match for Tublat. But using his superior cunning, speed, agility, and ingenuity, he manages to defeat him.

In this episode, Tublat appeared as the leader of the family of a gorilla named Gobu, whom Tarzan had earlier nursed back to health after he found him being attacked by a pack of hyenas. Gobu states that a few months before the events in that episode took place, Tublat killed the family leader and took control over instead, content to take over another family rather than Kerchak's. With the help of a malicious new monkey friend named Fungi, he forced Gobu to gain Tarzan's trust and bring him to him directly under threat of mutilating or even killing Gobu's relatives. Relishing the long-awaited opportunity to kill Tarzan, Tublat has his minions pursue him after the ape-man escapes and blackmails him into compliance by threatening Terk (who had also traveled to find Gobu and pursue a relationship with him). To save his friend, Tarzan concedes to allow Tublat to have his way with him. Eagerly intending to do so, Tublat is intercepted by Gobu himself. Emboldened by Tarzan's earlier speech towards him, Gobu openly speaks out against Tublat claiming he is dependent on the family to secure his victory over Tarzan. Seething with rage, Tublat attacks Gobu with lethal intentions for his defiance; stating maliciously he has outlived his usefulness. After beating aside the intervening Tarzan, Tublat grabs Gobu in a bear hug to crush him to death. Gobu cries out to his family; encouraging them to stand together and face Tublat and that they are stronger than him together. Re-inspired, the family turns on Tublat and overpowers him. Driven off, Tublat lets out a roar of anger before fleeing. With him and his family now free from Tublat's malign overrule, Gobu steps up to lead them.

Niels and Merkus return to the Jungle to mine diamonds. Tarzan agrees to this as long as they stay away from the gorillas. Neils and Merkus are threatened by Tublat, who they capture and plan to make money out of. Tarzan sets out to rescue Tublat, despite Terk's protests and the past conflict between them. Tublat tells Tarzan that just because he freed him doesn't mean he'll be grateful, but Tarzan wasn't expecting thanks anyway.

Tublat as seen in "The Legend of Tarzan" intro 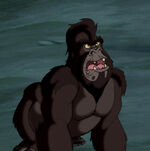