Leader of the Bears

Salmon, Koda, hanging out with friends

Chipmunks, weird things that Kenai does, anything dangerous

Active
Tug is a supporting character in Disney's 2003 animated feature film, Brother Bear, and it's 2006 sequel.

Tug was originally developed as a character named Grizz, who served as Kenai's traveling companion and guide to the animal world. However, Michael Eisner believed that Kenai needed a "little brother" figure instead of the older brother figure that was Grizz, resulting in Koda. As the filmmakers had grown to love the character and wanted to keep Michael Clarke Duncan in the movie, they decided to give him a new role as the lead bear at the Salmon Run.

Tug serves as the leader of the bears who live and gather at the Salmon Run. As such, he deeply cares for all of the bears there, big and small. He also helps Kenai ease into the bear lifestyle. Huge, bulky and very powerful, he initially is thought very intimidating by Kenai, though Koda's interaction with him and his overall fun-loving manner shows him to be more of a gentle giant than anything else.

Sometime before the events of Brother Bear, Tug apparently toppled a tree that was blocking the view from his cave; unfortunately, the tree in question was home to a family of chipmunks, which quickly took up residence in his home as retribution for the desecration of their old home (something he felt rather awkward about). In addition to this, as explained in the widescreen DVD intro, Tug also once hibernated three winters straight through as a cub. When he finally woke up, his mother hardly recognized him and his brothers would not go near him because of how awful he smelled due to not cleaning his fur for so long.

Tug doesn't make an appearance until very late in the film. He is first seen at the Salmon Run, telling Kenai to stop screaming, as he is scaring off the fish. When Kenai says that he doesn't belong at the Salmon Run, Tug tells him that "every bear belongs here". Tug along with the other bears later tell stories to each other and listens to Koda's story about how he got sepreated from his mother.

Tug makes a brief appearance in Brother Bear 2. Kenai and Koda meet Tug, and Koda says that he and Kenai are going to Crowberry Ridge to pick some berries. When Koda starts naming the various kinds of berries that he and Kenai are going to eat, Tug slows Koda down and mentions that those are a lot of berries. He also tells them that spring is when love often happens for everyone, and that it has a way of tracking everyone down no matter how hard they run from it. Shortly after, a female bear calls for Tug, and Tug tells them that he has to go, and then leaves to be with his love interest. 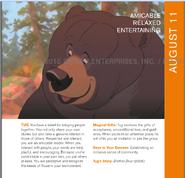 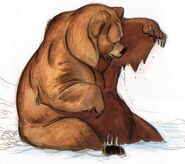 Concept art of Grizz, the character that would be retooled into Tug.