Fix-It (robotic dog)
Turner is a flathead screwdriver who appears to be sarcastic and cynical, who often fights with Felipe, whom he considers a rival. He appears to have a secret soft spot for animals (including birds, kittens, and butterflies), although he loudly denies it. Turner is the other character besides Mr. Lopart that bad luck comes to.

Turner has the grumpiest personality out of the tools. He is very sarcastic and cynical, and he doesn't get along with Felipe, who is his rival. He often loses patience with Pat and Rusty due to Pat's lack of intelligence and Rusty's fear of things. Despite his rash behavior, Turner does have a soft spot for animals and babies in one episode, but he always covers it up. The others, though, like to point this out, much to his chagrin.

There are also episodes where he shows a genuinely caring relationship with Felipe. In "Supremoguy", when Felipe nearly fell off a scaffold, Turner was the first to say, "I'll get ya!" and in "Breakfast of Champions" expresses concern for him when Felipe got worn out. As well as standing or sitting next to him in later episodes. Turner is shown to be really talented at dancing. Turner would sometimes express such strong emotions such as crying and blushing. Turner liked Carlos once. 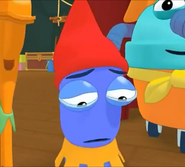 Retrieved from "https://disney.fandom.com/wiki/Turner?oldid=4483346"
Community content is available under CC-BY-SA unless otherwise noted.