"Turning Point" is the second segment of the forty-second episode of Amphibia.

Sasha and Grime escape from Andrias and hide out in Wartwood.

Some days earlier, after Marcy is stabbed and Anne and the Plantars are sent home, King Andrias orders a nervously willing Lady Olivia and General Yunan to take Marcy's body away to a rejuvenation tank. Having gotten the Calamity Box, he plans to move forward. Meanwhile, Sasha and Grime are hiding from Andrias and are nearly caught by his Frog-Bots, but jump out the window to flee from them. They are rescued by Joe Sparrow and fly away where they witness the rest of the toad army getting captured. With no other option, they cannot return to Toad Tower and decide to go the place he is least likely to look: Wartwood. However Andias sees them and orders a Frog-Bot to follow them

Sasha and Grime arrive to the confusion of the townspeople who want to know what is happening and why the castle is floating. They tell them that King Andrias is a "ruthless tyrant of unspeakable power" much to the townsfolk's shock , but that Anne and the Plantars are on a new mission and sent the two to protect them. The people of Wartwood are relieved to hear this, but Sasha feels guilty. Grime gets word from his sister Beatrice that the Toads are regrouping and planning an attack, but Sasha does not want any more plans or schemes and wants to stop. She is further perturbed when the Wartwood citizens offer her things and compliment her closeness to Anne. Sasha and Grime encounter the Frog-Bot and it take out, but it was sending a signal for backup before it was destroyed. Grime says they need to leave, believing Wartwood won't stand a chance against the upcoming war, but Sasha does not want to.

Sasha enters the Plantars' home and finds Anne's journal where she learns that Anne genuinely valued her friendship with her. Realizing that being in control of her friends ruined everything, Sasha makes amends by telling the townsfolk the truth. A giant Frog-Bot that spews smaller Frog-Bots attacks the town and Grime returns to help Sasha. Soon, the rest of the townsfolk join in in defeating the Frog-Bots while Sasha and Grime use the giant Frog-Bot's own missiles to blow itself up. Once again, the townsfolk thank Sasha and Grime for helping them and Sasha promises to be a real protector. As they wonder what to next, Sasha looks at Grime as he nods his head, taking the lead, she tells them that they will fight back. 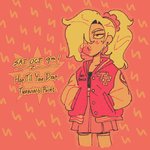