March 18, 2017
"Twin Suns" is the fifty-seventh episode of the Disney XD animated series, Star Wars Rebels. It premiered on March 18, 2017, and is the twentieth episode in the third season.

Lost on the desert world of Tatooine, Maul is searching for Obi-Wan Kenobi. However, his chances of finding him seem hopeless, but his overwhelming desire for revenge presses him on. So he conjures up a plan to lure him out.

Back on Atollon, mostly everyone at Chopper Base is asleep. However, Ezra is woken up by Kenobi's voice. He at first ignores it, but after he hears Obi-Wan's voice again, he gets up and follows Kenobi's voice to Kanan's room. He traces the sound of Obi-Wan's voice to the shattered Holocrons. The Jedi Holocron is found playing Obi-Wan's message, and when Ezra turns his attention to the Sith Holocron he is spooked by the sudden sound of Maul's voice, just as Kanan shows up. The two Jedi speak with Hera, Sato, and Rex about it, and while Ezra believes that Obi-Wan could be alive and in danger everyone else does not. Ezra wishes to journey to Tatooine, but in light of their upcoming attack on Lothal he is denied permission, since he will be needed if they were going to accomplish this mission. Ezra stubbornly tried and tried to convince Hera to let him find Obi-Wan, but she would not change her mind. The decision had been made, and Ezra reluctantly said no more.

The next day, Phoenix Squadron is busy preparing the A-Wings for battle. Ezra shows up with a large supply of munitions for the fighters. He presents them to one of his fellow Rebels, and while observing the inventory Ezra hijacks the training fighter and flies to Tatooine. Upon arriving, Ezra surprisingly discovers Chopper is with him. Back at the base, Chopper was watching him from afar and somehow stowed away on the fighter. Ezra did not want to bring anyone, but pressed on with finding Obi-Wan. They descended to the surface, and using pieces from the Jedi Holocron as a compass, they are guided to a rocky part of Tatooine late at night. After landing, Ezra follows the pieces on foot, only to find that it has been guiding him to a piece of the Sith Holocron. Just when he realizes they have fallen into a trap set by Maul, Ezra and Chopper are attacked by Tusken Raiders. They destroy their ship, but then get killed by Maul. With their ship destroyed, Ezra and Chopper are left with no choice but to press on. By morning, Ezra and Chopper make it to the edge of the desert. They decide to head along the ridge, but then Ezra changes his mind when he senses Maul's presence heading out into the desert. He leaves Chopper to follow the ridge, but reluctantly follows him. Following the Holocrons, Ezra and Chopper travel further out into the desert. Eventually they end up lost, with the two hot suns beating down on them. Chopper loses power, and Ezra, all tired out, begins to regret his decision of coming to Tatooine. He now feels lost and hopeless.

Ezra passes out, just as a mysterious figure comes to his rescue, and wakes up beside a fire with Chopper fully recharged. On the other side of the fire is Obi-Wan Kenobi. He is already aware of Maul's search for him, and explains to Ezra that everything that he has been hoping for has been a deception. From the beginning, Maul used his desire to do good to deceive him. In doing so, he has manipulated Ezra into coming to Tatooine in the hopes of luring Obi-Wan out of hiding, which he has accomplished. Just then, Maul himself shows up. Obi-Wan sends Ezra and Chopper on their way home while he stays behind to face his former foe. Before making his move to kill him, Maul begins to question Obi-Wan's reason for being on Tatooine all these years. He does not believe that he is just hiding, but more like protecting something or someone. The two enemies draw their Lightsabers and prepare to fight. Maul attacks first, but Obi-Wan quickly slashes the former Sith Lord. Before dying in his arms, Obi-Wan reveals to Maul that the one he is protecting is the "Chosen One", whom Maul believes will avenge them both.

Flying Maul's ship, Ezra and Chopper return to Atollon. Ezra assures everyone that they will have no more troubles with Maul and apologizes for running off. Meanwhile as the twin suns set, Obi-Wan watches Luke Skywalker from afar, pondering over the destiny that long awaits him. 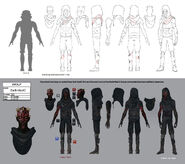 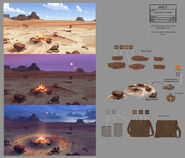 Ezra and Chopper on Tatooine

Retrieved from "https://disney.fandom.com/wiki/Twin_Suns?oldid=4058643"
Community content is available under CC-BY-SA unless otherwise noted.