Twitch is a green wrestler action figure with a bug's head who appears in Disney/Pixar's 2010 animated film Toy Story 3 as one of the tertiary antagonists. He was one of Lotso's henchmen, but in the end he is reformed.

Twitch is first seen helping up a fallen Mrs. Potato Head. He then allows her to feel his biceps, making Mr. Potato Head jealous. Twitch is later seen gambling inside a vending machine with Lotso's gang and helps apprehend Andy's toys. He keeps a search light working in the playground while on patrol. As with his cohorts, he is eventually convinced of Lotso's evil by Woody and Ken. In the credits, he shares the abuse of the younger children with Chunk happily.

"Meet Twitch the insectaloid warrior, where MAN + INSECT = AWESOME! This sturdy action figure stands over five inches tall, with more than 15 points of articulation, including ferocious chomping mandibles. Use his powerful wings and impenetrable exoskeleton to evade capture! Twitch is meticulously detailed and includes his signature magical battle staff and removable chest armor. For children ages 4 and up. Other insectaloid figures sold separately."

Twitch is an insect-like warrior action figure toy at Sunnyside Daycare. He has a bug's head with red eyes along with ferocious chomping mandibles, wings, two beefy arms, removable chest armor, and his signature battle staff.

Twitch is first seen after the toys arrive at Sunnyside's Butterfly Room. After he helps Mrs. Potato Head get back up, she asks if she can feel Twitch's biceps. She is amazed by it, making Mr. Potato Head jealous and he tries to see his muscles, only for his arm to limp down, much to his disgust. Later, when Buzz leaves the Caterpillar Room to ask Lotso to transfer him and his friends to the Butterfly Room, he spots Twitch and Chunk, who are on their way to the vending machine to gamble, laughing about Buzz and his friend's rough playtime with the toddlers, making Buzz suspicious.

Inside the vending machine, Twitch and Lotso's gang are gambling, as Buzz spies on them. Twitch thinks all the toys are disposable. It is shown that Twitch often makes fun of Ken, due to him being a "girl's toy" and his feelings for Barbie. After Buzz is caught by the henchmen and switched to "Demo" mode, Twitch is shown as one of Lotso's guards, helping apprehend Andy's toys, and has the responsibility of being the playground night guard, watching for any toys trying to escape by using a search light.

Near the end of the film, Twitch and his cohorts follow Lotso to corner Andy's toys at a garbage dumpster. Twitch and Sparks carry a broken Chatter Telephone (which they beat up earlier). However, Twitch, along with his cohorts, is convinced of Lotso's treachery and deception by Woody and Ken, and reforms. He is shocked when he witnesses Lotso mistreat Big Baby by punching him in the stomach with his mallet. He then watches as Big Baby throws Lotso into the dumpster; afterwards, Twitch leaves the area, letting the toys escape and leaving Lotso to his fate in the dumpster.

In the end credits, Twitch is seen taking his turn in enduring a rough playtime with the toddlers in the Caterpillar Room, switching with Chunk so he can rest. He is later seen at the disco in the Butterfly Room and has a happier life without Lotso. 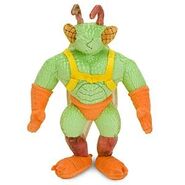 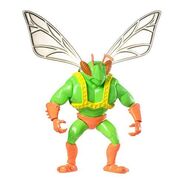