Deuce Martinez (best friend)
Flynn Jones
CeCe Jones
Tinka Hessenheffer
Tyler "Ty" Blue is a main character on Shake It Up. Although he is a very good dancer, he does not want to go try out for Shake It Up, Chicago!, claiming he doesn't "dance for the man". Instead, he aspires to be a rapper. He is the son of Curtis Blue and Marcie Blue, and the older brother of Rocky Blue. He lives in an apartment in Chicago, Illinois with his family in the suite above the Jones family, for whom he babysits the youngest, Flynn Jones, often. His father is a doctor that returned in the second season after being away on business trips and working overseas. He attends John Hughes High School in Chicago, Illinois.

Ty is Rocky's hip, sarcastic older brother who is popular at school, loves to dance, and knows how to charm the girls. He is seen as a very cheerful and sociable guy, and always seems to have a date. Being raised with his sister, he is also logical and smart, especially when it comes to his money. He has been known to be saving up for a car, and he gets a job at Crusty's. His personality shone through most in "Split It Up" when he rapped about things like cheap haircuts, and had to consult Deuce and Flynn to up his bad boy image. By the end of the episode, he had helped an elderly woman retrieve her purse from a robber and delivered a baby panda at the zoo, calling the process "beautiful". Although Ty hasn't claimed to have any girlfriends, he has went on a date with Tinka, but nothing further has been showed about their relationship. It is revealed in "Weird It Up" that his relationships don't last because he blows girls off when the relationship gets too clingy.

In Season 1, Ty Blue stated that he "doesn't dance for the man", but in Season 3, Ty Blue auditions to be on Shake It Up, Chicago!. Ty learns to be proud of his dancing skills again and wants to be hired as a dancer on the show.

Initially the executive producer and the host are unsure which whether to pick Rocky or Ty. Eventually though, Ty is chosen over his sister to be a dancer on Shake It Up, Chicago!.

Rocky is Ty's younger sister. Rocky knows a few embarrassing things about him and at times, she threatens to tell the world about them. They are both talented dancers. Their dad, Curtis Blue, hopes that they will become doctors, even though Rocky wants to become a dancer and Ty wants to be a rapper. They work together (along with CeCe) to showcase their talent and dedication to their dad by setting up a surprise performance for him in "Doctor It Up", as well as Ty trying to keep their dad from turning on the television to avoid seeing Rocky on Shake It Up. There are instances where Ty looks out for his little sister, such as collecting signatures at school to sponsor her in the dance marathon in "Give It Up" and supporting her in "Model It Up". He also worked with CeCe and Tinka to get Rocky back on Shake It Up, Chicago!. (See: Ry)

CeCe is a close friend of Ty's, since she is his sister's best friend. They both attend JHHS and have several things in common such as a love for dancing. She often involves him in her plans, such as making it seem like they didn't care if Rocky left to model in New York in "Model It Up", where they also hugged (with Deuce and Flynn) when they thought Rocky was actually leaving. In "Show It Up", CeCe grabs Ty's leg when she's begging for him to help her and Rocky in the talent show against Candy Cho and the Bulldogs cheerleading squad. CeCe, along with Rocky, takes Ty and Deuce to the Olive Pit in "Meatball It Up". Although Ty doesn't pay much attention to CeCe or Rocky when they need his help, he's still there for them when they need it (as seen in "Match It Up", "Show It Up", and "Vatalihootsit It Up"). Ty and CeCe also teamed up with Tinka to try to get Rocky back on Shake It Up, Chicago!.

Deuce is Ty's best friend. They're always together, whether it be babysitting Flynn, at school, at Crusty's where they both work, or different situations that they get themselves into. They met in the 3rd grade and became friends after Deuce bought Ty's favorite video game and invited him over to play ("Twist It Up"). The two have similar personalities. Deuce seems to admire Ty a lot, once calling him his "hero", saying that he always felt safe when he was around ("Reunion It Up"). While Deuce is currently dating Dina, Ty goes out with different girls and seems to keep Deuce posted on his love life. Deuce knew that Ty really liked Gina so he asked Dina to please try to get along with her during their double date in "Parent Trap It Up". They both got tired of the girls fighting and Ty ran after Deuce after he embarrassed himself. Deuce agreed to be the translator for Ty's date with the foreign exchange student Gloria and didn't want Ty to know that she really likes him so he lies about Gloria wanting a long term relationship to spare his feelings ("Weird It Up").

Flynn and Ty are close friends and neighbors. Ty babysits Flynn almost all the time. He is like a big brother to Flynn and he has taught him many things like how to whistle, dance, and flirt throughout the series. Flynn was jealous when Ty was paying a girl more attention than him in "Egg It Up", going as far as firing him and hiring Gunther instead. Flynn has also helped Ty, especially when it comes to his aspiring rap career "Split It Up".They get into interesting situations and adventures together, such as working for a toy company as toy testers ("Shrink It Up") and auditioning for a commercial ("Vatalihootsit It Up"). Ty is usually heard calling Flynn "Little Man". Ty often feels threatened by others earning Flynn's respect, such as Logan and Gunther.

Tinka and Ty went on a date in "Add It Up", where he described her as "a whack job with good hair." Gunther paid a hesitant Ty $50 to ask Tinka out because she felt bad about never going on a date. They danced together and got to know each other during the date. By the end of it, Tinka admitted she enjoyed the date, and so did Ty, but that being a couple wouldn't work because they're so different. They played ping pong against each other in "Camp It Up", where Ty was again hesitant to play against her because she's a girl. Tinka demanded that he not go easy on her just because she's a girl. In Whodunit Up?, when Ty saw Tinka putting the note in his locker he thought she was the one sending him the secret admirer notes (he also seems to be happy about it). In Ty It Up, Ty dances with Tinka for their audition for Shake It Up, Chicago!. They have been talking and interacting with each other in a friendly way since then. In Future It Up they are revealed to both be single while the rest of the group was married (Cece Jones,Rocky Blue,Dina Garcia, Deuce Martinez , and Logan Hunter) by the end of the episode they realized that they were meant for each other and ended up together (The reason the're quotation marks is because Ty never officially proposed to her meaning he never gave her a ring but did ask if she wanted to marry him)and Tynka was born

Gunther is a schoolmate and /frenemy of Ty's. Sometimes they don't get along, due to Ty thinking Gunther is unusual. For the most part, they are friends and Ty gets along with Gunther more than anyone else on the show besides Tinka. In "Age It Up", they were involved in a subplot similar to "My Fair Lady", where Ty tried to make Gunther more "hip" after seeing him get rejected by Gunther's crush, Danielle. He succeeded, turning Gunther into a "cool" guy called "G" by making over his appearance and attitude. When Danielle accepted Gunther's offer for a date, Ty offered to get a pizza with him to celebrate, which Gunther rejected because he thought he was too good for Ty. They made up by the end of the episode. They also played a few friendly games of ping pong in "Camp It Up" and got back at Flynn together in "Egg It Up".

In their first episode together, Ty and Logan were good friends but after Rocky kissed Logan,Ty didn't like Logan because he is protective of Rocky.Ty hates it when Logan does the "call me" signal to Rocky.Despite that Ty think Logan is a cool dude

Forward & Back It Up: Ty tries to help CeCe and Tinka to get Rocky back on the Shake It Up, Chicago!. 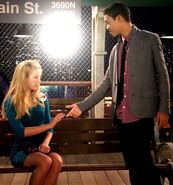 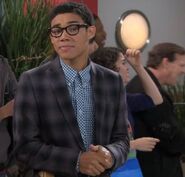 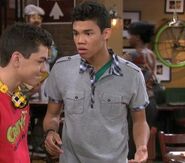 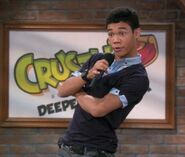 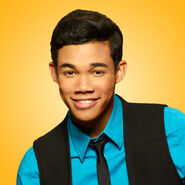 Add a photo to this gallery
Retrieved from "https://disney.fandom.com/wiki/Ty_Blue?oldid=4132484"
Community content is available under CC-BY-SA unless otherwise noted.