Tyler Gerald "Ty" Burrell is an American actor, voice actor, and comedian, who is best known for his main role as Phil Dunphy in the ABC sitcom Modern Family from 2009 to 2020, as well as the character Mr. Peabody in the Dreamworks animated film, Mr. Peabody and Sherman .

Within the Disney Parks, he narrated the Colortopia exhibit at Innoventions and the Awesome Planet film at Epcot. 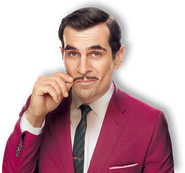 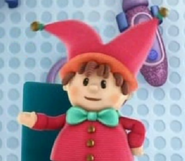 Ty Burrell at the premiere of Muppets Most Wanted in March 2014.

Ty Burrell behind the scenes of Finding Dory.

Ty Burrell at the premiere of Finding Dory in June 2016.

Ty Burrell and Amy Poehler speak at the Duncanville panel at the Fox segment of the 2019 Summer TCA Tour.
Nederlands
Community content is available under CC-BY-SA unless otherwise noted.
Advertisement