Tybalt from Romeo and Juliet

Tybalt was a plot-driving character in the 2011 computer-animated Touchstone Pictures comedy film, Gnomeo & Juliet. He is the counterpart to Tybalt from Romeo and Juliet. He is a Red gnome and the best friend of Fawn.

Tybalt first appeared when Benny kicked a snail into his mouth. Later, Tybalt was competing with Gnomeo in a lawnmower race, where he knocked Gnomeo and his mower askew with a pipe. After the race, Benny called him a cheat, and Tybalt kicked him over. Tybalt retired to the Red garden, to which Benny responded saying," Come out and fight like a gnome!" and "Flower boy won't come out."

Later that night, Tybalt discovered Gnomeo in the red garden, sending Fawn and the little red gnomes after him. Tybalt ended up fighting Gnomeo on top of the boat until they froze due to Mr. Capulet seeing them outside.

That same night, Tybalt runs into Juliet when she's running back to the Red garden after her encounter with Gnomeo. He questions her, asking if she's seen Gnomeo, to which she lies, saying she hasn't seen him at all. Tybalt escorts her back into the Red garden.

Later on, Tybalt sees Benny going out into the alley after handling a weed-killer gun. Tybalt jokes about this to Fawn and the little red gnomes, implying that he's going to use the Red mower smash Benny. Eventually, Tybalt is only able to chop off Benny's hat in the alley. Gnomeo is upset by this, fighting Tybalt on the mower. Eventually, Gnomeo gets off of the mower and Tybalt crashes into a wall, consequently getting smashed.

At the end of the film, Tybalt is glued back together and dancing with the other gnomes. 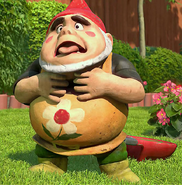 Retrieved from "https://disney.fandom.com/wiki/Tybalt?oldid=4370045"
Community content is available under CC-BY-SA unless otherwise noted.