His parents, Fritz, Val, Cutter, being a jokester, scaring (formerly)

The idea of monsters not scaring children (formerly), Duncan’s hostile and threatening attitude towards him

Tylor Tuskmon is the protagonist of the Disney/Pixar animated series, Monsters at Work.

A recent Scare Major graduate from Monsters University, Tylor finds himself working at Monsters, Inc. on the day that the company begins its shift from scare energy to laughter. Struggling to adapt, Tylor ends up working as a mechanic in the Monsters Inc Facilities Team.

Tylor is a very kind and honest individual. Despite having initially worked his way up to being a scarer, he is very humble and grounded with a wide-eyed enthusiasm. Having followed a path most of his life, he suddenly felt disjointed and out of place upon learning that Monsters, Inc. was changing its policy from scaring to joking. Since then, he has become somewhat neurotic and perplexed by his new job and those around him. However, he adjusts quickly and is easy to overcome his initial prejudices as he was happy to see MIFT prove him wrong about their work and was happy seeing Banana Bread get accepted as a jokester on the laugh floor.

Despite originally finding the MIFT team overwhelming and even annoying in some ways, Tylor grew to appreciate them for their friendship and respect their skills that are necessary to the company's maintenance.

As becoming a scarer was no longer an option, Tylor decided to study Mike's Comedy Classes to become a Jokester, and had a difficult time in finding the right comedic angle that would work for him. In It's Laughter They're After, Tylor had a talk with Sulley, expressing his wish that things could go back to the way they were and he could become a scarer, only to be humbled when Sulley shared something personal in how he realized how scared children are of monsters and that changing the policy to laughter was the right thing to do.

In the end, Tylor found his comedic angle and although he was reluctant to leave his friends in MIFT they encouraged him to become a full-time Jokster, with Val becoming his assistant.

Tylor is a purple monster with an athletic build, wide shoulders, blue lumps on his back, and short reptilian-like legs. He has blue spots and stripes, long, brown bull-like horns, dark brown unibrow, green eyes, and short, aqua hair.

In his original design, he was originally supposed to be yellow with spikes on his back and sharp nails. His horns were also smaller.

One of Tylor's earliest designs. This would later be reused for a background monster. 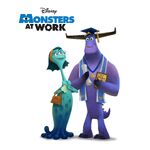 A deleted scene at his graduation

"When I asked 'Is this seat taken', you said 'You picked the best seat in the house'."