The Father of All Monsters
Love muffin
Baby cakes

Lightning bolt (temporarily), 4 pillars and a dome for a shield (during a fight against Zeus)
Typhon, also known as the Father of All Monsters, is a character from Hercules: The Animated Series. He was the most powerful of all the Titans. He was challenged by Zeus and beaten by Hera when she hurled a lightning bolt at one of Typhon's nostrils. He was imprisoned under Mount Etna, resulting in him gaining a massive headache lasting centuries, during which he sought revenge on Zeus.

He appeared in the episode; "Hercules and the Return of Typhon". While battling Echidna, Typhon's wife, Hercules accidentally freed his father's greatest nightmare and Typhon prepared for a rematch by spending "quality time" with Echidna and baby Ladon. When Zeus and Hercules reappeared, Typhon throttled his enemy and nearly succeeded when Hera once more intervened and threw a lightning bolt into his nostril, forcing all three monsters to flee, though Typhon demanded another rematch the next time. When they discover that Hera and Zeus were working together, Echidna and Typhon attempted to get Homer to fix the facts.

In "Hercules and the Long Nightmare", Phantasos, the god of dreams and younger brother of Morpheus, served as the main antagonist in the episode. He spreads his own blanket of nightmares over the world, causing Hercules and Phil and the rest of Greece to have bad dreams. Phantasos takes the form of Typhon during the final stage of his battle with Hercules before being pulled back into reality.

Typhon was Red dragon-like Titan with 4 snake heads and necks for hands and arms and 5 snake tails for legs (sometimes used as arms during a fight with Zeus). Being the most powerful of the Titans, Typhon was could breathe fire and has incredible strength. His strength seems to rival or surpass Zeus, as he can flick Hercules away and overpower Zeus using extra weapons. In addition his snake headed-arms and rattle snake tail-legs were uses appendages that allowed him to grab onto things and use them as weapons as he used a dome as a shield, several pillars, and one of Zeus’s lightning bolts. However despite his incredible durability it is shown that he can be injured as one of lightning bolts briefly injured him. 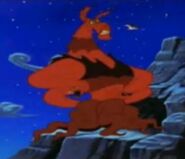 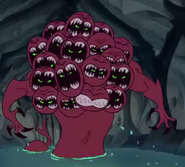 Typhon as he appeared in Hades Challenge