York Banks Alsa
Tyra Lynne Banks is an American actress, producer, writer, author, television personality, and model, who is best known as the creator and host of the UPN/The CW reality competition series America's Next Top Model since 2003, and the syndication/The CW talk show series The Tyra Banks Show.

For Disney, she starred as Eve in the 2000 movie Life-Size and then reprised the role as well as portraying a counterpart in it's sequel, appeared as herself in Hannah Montana: The Movie, Mrs. Burke in Shake It Up, Zoe in the 2000 Touchstone Pictures film, Coyote Ugly, Gigi in the ABC TV show, Black-ish, and the hostess and the female alien greeter in ExtraTERRORestrial Alien Encounter. She was mentioned in the That's So Raven episode "Dissin' Cousins". Tyra has confirmed that another sequel, Life-Size 3 is also in development.[1] 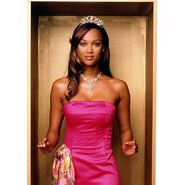