Grand Councilwoman
Captain Gantu (formerly)
The UGF Troopers (also known as the Intergalactic Police or Prison Guards) are characters from the Lilo & Stitch franchise. They are alien velociraptor-like guards who function as the backbone of the United Galactic Federation. They serve as both the guards for captains of spacecraft, as well as the guards for those arrested or imprisoned. The species of the guards are called Raptorsellus, and they are known to be temperamental when confronted or in battle.

In the original movie, Experiment 626 (later known as Stitch) was turned over to the UGF Troopers for custody. One guard then used a Sample Extractor to take a sample of Stitch's blood, then inserted the syringe into a machine that analyzed the blood's DNA, allowing for two plasma blasters on the ceiling to track Stitch's genetic signature and fire at him should he escape. However, Stitch quickly exploited a weakness in the tracking just shortly thereafter and used it to escape. Near the end of the film, a large group of prison guards were seen surrounding Stitch after he was apprehended and turned over to the Grand Councilwoman, though he was later released from custody.

Lilo & Stitch 2: Stitch Has a Glitch

In a flashback scene of Lilo & Stitch 2: Stitch Has a Glitch, Jumba was in his laboratory, where he had just finished creating Stitch and attempted to fully charge his molecules in order to prevent him from short-circuiting and dying. However, three UGF Troopers suddenly burst into the lab and apprehended Jumba for illegal experiment creation, thereby disrupting the process.

In Stitch! The Movie, two UGF Troopers were seen apprehending Dr. Hämsterviel after he had been successfully captured by Lilo, Stitch, and Experiment 221 (recently known as Sparky).

In "Finder", several UGF Troopers were seen hunting down Hämsterviel after he had escaped from prison, although he managed to evade them. Near the end of the episode, two guards were seen arresting Hämsterviel again after he had been captured by Gantu; however, since Gantu had unintentionally kidnapped Mertle Edmonds in the process, the Grand Councilwoman rescinded her offer to reinstate Gantu to his former position as captain.

In "Woops", a couple of UGF Troopers were alerted after Experiment 600 (Woops) had been activated by Hämsterviel and caused mayhem around the prison, which almost blew Hämsterviel's cover in the process, and as a result, he was forced to send all of his captive experiments back to Earth on Gantu's ship.

In Leroy & Stitch, two UGF Troopers were seen standing on either side of the door, permitting Stitch (captain of the B.R.B. 9000) entry to rendezvous with the Grand Councilwoman. It should be noted that these guards were wearing traditional captain uniforms similar to Stitch's, instead of their usual chemical protection suits. 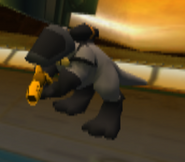