Under The Sea: A Descendants Story

Isle of the Lost (formerly)

Being humiliated, defeat, Mal, being called "Shrimpy", being forgotten, disrespect

"You can stick a tiara on a villain, but, you're still a villain"
"You didn't think that was the end of the story did you?"

“The world will know my name!”
―Uma

Uma is the main antagonist who appears in the sequel Descendants 2. She is the daughter of Ursula.

Years ago, on the Isle of the Lost, Mal wasn't just friends with Mad Maddy; she also teamed up with the daughter of the Sea Witch, Uma for all kinds of mischief. However, an attempt to prank the especially mean Cruella De Vil leads Mal to seemingly fall off the docks and into the water. Uma laughs at her instead of saving her, only for Mal to surprise her and dump a bucket of shrimp on Uma in return. No matter how much Uma tried to wash her hair, the disgusting smell never left her hair. Mal then got everyone to call Uma the name Shrimpy.

Despite being cruel and ruthless, Uma does care about her gang as she had an opportunity to attack Mal from behind, but gave it up to help Harry when he asked her for help.

Uma has a slender figure, brown skin, dark brown eyes and black eyebrows, and long braided aqua hair. She wears her mother's necklace around her neck and is dressed in pirate clothes, usually wearing bracelets on her wrists, and turquoise nail polish. As a giant cecaelia, she has aqua colored tentacles.

Behind the scenes photo of Uma and her pirate crew 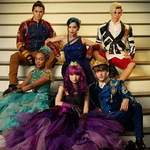 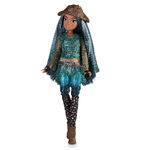 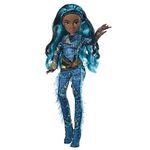 Retrieved from "https://disney.fandom.com/wiki/Uma?oldid=3670629"
Community content is available under CC-BY-SA unless otherwise noted.