The deep ocean in Portorosso, Italy

Talking for hours, the deep, the dark and cold, whale meat.

Uncle Ugo, perhaps Luca’s strangest and most bizarre relative, emerges from the deepest part of the ocean to help Daniela and Lorenzo convince Luca of the dangers of the surface. Like Luca, Ugo once wondered about the world beyond the surface. But following a near-death encounter he learned to steer clear, relocating to his deep-water home where it’s pitch dark, bitterly cold and far, far away from the scary humans above the sea—just the way he likes it.

In his sea monster form, Ugo resembles a humanoid anglerfish as he has a glowing blue antenna and glowing blue eyes. He also seems to be wearing tan moss shorts. 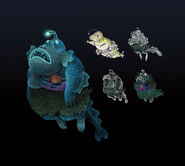 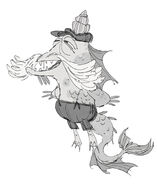 Retrieved from "https://disney.fandom.com/wiki/Uncle_Ugo?oldid=4576946"
Community content is available under CC-BY-SA unless otherwise noted.