Horses with a horn and coat of various colors

The Unicorns are a race of equine creatures with a horn protruding from their forehead. They are part of the cast in the "Pastoral Symphony" segment of the 1940 film Fantasia.

The unicorns inhabit Olympus along with the other mythological creatures. They are somewhat close to classical representations of unicorns, having hairy fetlocks, spiraled horns, a "lion" tail, and cloven hooves. Unlike the Pegasi, they don't seem to exhibit a lot of variety in colors, as they're only shown as white with pink manes or blue or pink with white manes. They all have golden horns, however. With the centaurs, they seem to get along well, to the point that a centaurette took it upon herself to rescue a stranded unicorn in the middle of the storm.

The unicorns are shown to be rather brave despite their appearance, and will protect each other at all costs. A pink adult, for instance, was shown braving the storm's strong winds while three foals were hiding under it.

The unicorns make their debut frolicking in the flower fields and open - air temples of ancient Greece along with their friends, the satyrs, playing and generally having a good time. They also engage in Bacchus' celebration along with the satyrs, centaurs, and centaurettes, enjoying the dancing and wine making.

Soon, their fun is spoiled when Zeus decides to create a thunderstorm with powerful winds and heavy rain, forcing them (along with the rest of the surface dwellers) to take refuge inside temples, groves, and hedges before he can unleash his thunderbolts. When he tires of tormenting them and goes back to sleep they celebrate the storm's end along with the other creatures and enjoy watching Iris casting a rainbow over the sky with her cape, Apollo racing away on his sun chariot and waving goodbye to them as the sun sets, and tucking themselves in as Morpheus casts her cloak of night over the land. By the time Diana shoots her arrow into the sky and fills it with stars, they are sound asleep, as is everyone else.

After Snow White and Prince Charming learn of their unborn child's potential for great darkness, they learn that if they touch a unicorn's horn, they can glimpse what their child will be like in the future. When Charming touches it, he see's a young baby in the forest but when Snow touches it, she sees her teenage daughter rip her heart out and crush it.

Maleficent with her unicorn in Once Upon a Time 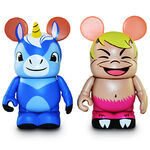 Unicorn Vinylmation
Add a photo to this gallery