United Airlines, Inc. (also known as United) is an American major airline headquartered in Chicago, Illinois that was founded in 1926 as Varney Air Lines and commenced operations on March 28, 1931. Although not owned by Disney, they were the official airline sponsor for Disneyland in the 1960s and the 1970s. During this time, United also sponsored Walt Disney's Enchanted Tiki Room until 1974. 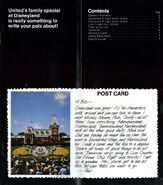 Add a photo to this gallery
Retrieved from "https://disney.fandom.com/wiki/United_Airlines?oldid=4155770"
Community content is available under CC-BY-SA unless otherwise noted.