Bass Brewery
The United Kingdom Pavilion is part of the World Showcase in Epcot at the Walt Disney World Resort in Orlando, Florida.

The United Kingdom Pavilion, designed to look like a typical British village, looks like 1/100 villages that are in the UK, although it could be argued that it is more stereotypical, with buildings based on several different periods of British architecture. There are British gardens (including a hedge maze). The shops sell British items, such as tea, toys, clothing, and The Beatles merchandise. There is also a band called "The British Invasion" that performs hits from acts such as The Police, The Rolling Stones, The Beatles, Blur, and Led Zeppelin, daily in the Pavilion. The Rose & Crown Pub and Dining Room serves traditional British food, as well as beer and ale. There is also a quick-service counter serving traditional Fish and Chips. There is also a sport shop selling British sport equipment, including Chelsea F.C. and Liverpool F.C. shirts, along with a shop selling traditional British confectioanry.

At the 2019 D23 Expo, an expansion to the Pavilion based on Mary Poppins was announced, with a new neighborhood based on Cherry Tree Lane serving as the facade for a Mary Poppins dark ride. 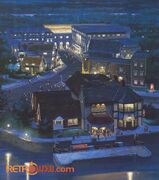 A concept artwork for the upcoming Mary Poppins attraction