Unleash the Villains was a Friday the 13th stage event that took place at Disney's Hollywood Studios in Walt Disney World in 2013. It was hosted by Hades from Hercules and the film's heroine Megara. The event begins when Meg introduces the guests to Hades to unleash thirteen of Disney's wickedest villains, followed by musical numbers and a blazing fireworks show called "Villainy in the Sky".

In 2014, the event became a hard-ticket event at DHS, and renamed Villains Unleashed, to be held on August 23. Besides the above-mentioned characters, there was over fifty villains from various Disney properties (including the Star Wars franchise, represented by Darth Vader and Darth Maul to name two) and a full takeover of the park. Star-Lord and Gamora also appeared at the "Awesome Mix Tape Dance Party" during this event.

13 of the most evil villains on stage 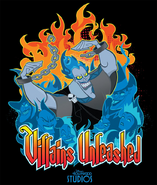