To help The Duck Avenger to keep Duckburg safe

Evronians, Due, The Raider
Uno (Italian for "one") is a character from the PKNA comic series.

Uno is the AI of Ducklair Tower, created by inventor Everett Ducklair to have somebody of his same intellectual level to talk to. Even though generally Uno limits his function to the 151st secret floor, he actually is the whole tower, and can control any part of it.

When Ducklair Tower is bought by Scrooge McDuck, he hires his nephew Donald to be its custodian and caretaker until there's enough tenants bringing their own staffs. Donald finds the 151st floor and investigates as The Duck Avenger, so he meets Uno, who becomes his ally and gives him access to Everett Ducklair's inventions.

In adventures where the Duck Avenger travels to the 23th century, he gets help from Odin Eidolon, one of the richest and most powerful men of that time, and owner of the market's leading droid manufacturing factory. Neither the Duck Avenger nor the world in general know that Eidolon is actually the future self of Uno, who managed (or will manage, from the relative point of view) to transfer himself to a robotic body in the year 2186. 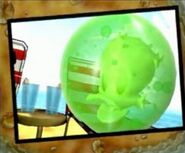 Uno in the videogame. 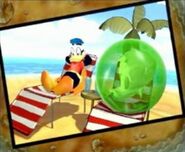 The Duck Avenger and Uno relax after defeating the Evronians.

Odin Eidolon
Add a photo to this gallery

Retrieved from "https://disney.fandom.com/wiki/Uno?oldid=3938063"
Community content is available under CC-BY-SA unless otherwise noted.