Disney Wiki
Register
Don't have an account?
Sign In
Advertisement
in: The Walt Disney Company, Unused concepts, Fantasia,
and 2 more

In the late 1930s-early 1940s, after all the segments for Fantasia had been selected, Walt asked his storymen and artists to start coming up with ideas for segments that could be included in follow-ups to the film. On Tuesday, May 14, 1940, he and Leopold Stokowski held a story meeting for the new ideas were to be discussed. Present at this meeting were Ben Sharpsteen, Joe Grant, Bob Carr, Ed Plumb, Bill Cox, Fred Stark, and Herb Perry.

The ideas for segments that the storymen had come up with and gotten some artists to draw concept art for included the following:

Ride of the Valkyries

Set to the composition of of the same name by Richard Wagner, this segment was to have depicted the Norse myth about the Valkyries who rode down to battlefields during war and took fallen heroes up to Valhalla. However, Walt felt that the piece couldn't be used because it was too closely associated with the Germans, due to the fact that Wagner was one of Hitler's favorite musicians. Art for the sequence was designed by Danish illustrator Kay Nielsen.

Set to the 1895 tone poem of the same name by Jean Sibelius, this segment was based on the Finnish legend that told of departed souls being guided toward heaven by a white swan. Although, Walt opted to not have the swan seen in order to keep the piece atmospheric. Due to this, the segment would merely have shown a boat bearing a corpse floating through reeds, then a cave, before it ascended into heaven.

Adventures in a Perambulator

Set to the 1914 piece of the same name by John Alden Carpenter, this segment would have followed a baby going for a day at the park and showed how he interpreted everything he saw. Artist Sylvia Holland did some preliminary drawings for this segment.

Invitation to the Waltz

Set to the 1819 piano composition of the same name by Carl Maria von Weber, this segment would have featured Peter Pegasus from the Pastoral Symphony segment and would have shown him leaving his mother's nest and having mischievous encounters, first with some ducks, then with a bumblebee before he returned.

Much like Dance of the Hours, this segment was to have parodied grand musical revues and would have featured babies performing mock dance steps in a nursery while they were being fed, diapered, bathed, etc. by a flock of storks. The music selected for this segment was the piano lullaby "Berceuse, Op. No 57" by Frédéric Chopin. Artwork for this sequence was designed by Mary Blair. 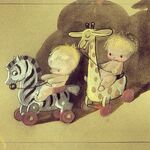 Flight of the Bumblebee

Set to Rimsky Korsakov's 1899 piece of the same name, this segment was to have followed the antics of a bee. Storyman Sam Armstrong suggested that if and when the concept was used, Walt could project an image of the bee onto the walls of the theatre in order to make it appear as if it were flying over the audience. In Fantasia 2000, Bette Midler refers to this scrapped segment as a "Bug Ballet". An alternate version of this segment with a jazzier version of Karsakov's composition was eventually used from the short, Bumble Boogie in Disney's 1948 animated feature film Melody Time.