The Pack receive genetic and technological upgrades to their bodies from Coyote and prove to be more than a match for Goliath, Elisa, Bronx and Hudson, who are captured. Meanwhile, vying for the position as second-in-command, Brooklyn, Lexington and Broadway must come up with a plan to free their friends and defeat the Pack.

Coyote offers the Pack dramatic alterations to their bodies since they have become a pathetic group of fugitives. Jackal and Hyena become cyborgs, while Wolf is mutated into the image of his animal namesake. Through Coyote's instruction, the Pack lures Goliath, Hudson, Elisa and Bronx into a trap and holds them hostage. Thanks to a tip from Fox through a television commercial, Brooklyn leads the trio to the Pack's hideout and the gargoyles use teamwork to defeat them.

Dingo has become disheartened with his membership to the Pack. He's not happy that they have sunk to a bank robbery. When offered an upgrade, he opts to dress in battle armor rather than mutilating his body like his teammates. Though he does aid the others in trying to kill the clan, he leaves the team afterward. The gargoyles spot the Pack robbing a bank and go to intercept them. Goliath is injured in the struggle. Hudson urges Goliath to choose a Second in Command from the trio, but Goliath keeps his decision to himself for a month, fearing that the trio would end their friendship over it. After the three young gargoyles rescue him and the others, however, Goliath realizes that they will always remain a team, and so appoints Brooklyn as his Second in Command.

The trio are at odds with one another during the ensuing month before Goliath makes his choice. They begin engaging in nightly arguments and competitions. However, after Brooklyn proves himself by showing leadership qualities and his talent for tactics coming up with a plan to saves his clan mates, both Broadway and Lexington agree that Goliath made the correct choice.

In contrast to the gargoyles, the Pack chooses between Wolf and Coyote as their new leader, and Coyote wins by democratic vote. Xanatos and Fox are playing a game of chess throughout the episode, revealing a much more dangerous game is going on. Xanatos had Coyote lead the Pack in going after the gargoyles, while Fox produced a commercial tipping the trio off to the location of the Pack's hideout. The whole setup is put together so that Xanatos and Fox could choose sides and entertain themselves by controlling people's lives. 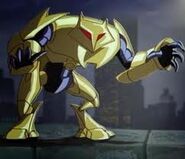 Coyote 2.0
Add a photo to this gallery

Retrieved from "https://disney.fandom.com/wiki/Upgrade?oldid=4206677"
Community content is available under CC-BY-SA unless otherwise noted.