For the character of the same name from Bear in the Big Blue House, see Ursa!

Pat Musick
Ursa Barbic is a Gummi Bear character who appears in the Adventures of the Gummi Bears.

Ursa is the hot-blooded female leader of the Barbics, an isolated, defensive and war absorbed clan of Gummi Bears who have a a great distrust and sometimes, hatred, of humans, who formerly lived in Barbic Woods, and who now live in Ursalia. She is protective of Buddy, but dislikes his non-Barbic hobbies and pushes him to prove his toughness as a Barbic. She has a similar personality to Gruffi, due to her hot temper and devotion to Gummi tradition, although her focus is purely on Barbic tradition, rather than that of the ancient Gummies. Her right-hand man is Gritty.

Ursa hated humans due to their destruction of her tribe's home, which forced the Barbics to move to Ursalia. In search of revenge in the episode "Return to Ursalia", she and the Barbics seek out the Ultimate Gummi Weapon in order to destroy the entire human race. But after seeing the damage it could cause, not only to humans, but to themselves as well, she decides against it.

Ursa's hatred remains strong until the Gummi Glen Gummies bring Cavin to Ursalia to witness Buddy's Test of Bearhood in "The Rite Stuff". After a spat between the two, in which Cavin claims to be as tough as any Barbic, Ursa suggests he also take the test to prove himself, which Cavin eagerly accepts. During the final phase of the test, in which Cavin and Buddy have to pass through the dreaded Gordian Gulch near Ursalia, Ursa reveals she had laid out a few surprises for Cavin in the gulch, intent on seeing Buddy defeat the young human. Her plan backfires however, as she, Gruffi, and Sir Thornberry discover a pair of satyr-like Hairy Gobbers in the gulch, who are intent on skinning Cavin and Buddy alive. Ursa leads the two creatures into the gulch, determined to rescue Buddy (though not necessarily Cavin) but sets off several of her own traps and is ultimately captured by the Gobbers, along with Gruffi and Sir Thornberry. After Cavin and Buddy risk their lives to rescue them, Ursa admits she was wrong about the young human, and that his actions proved his worth, making Cavin an honorary Barbic. 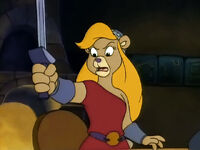 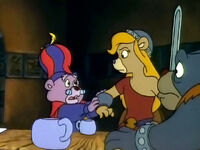 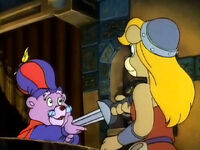 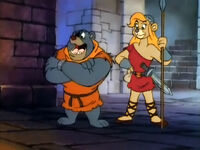 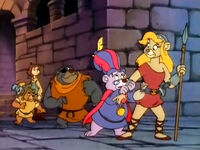 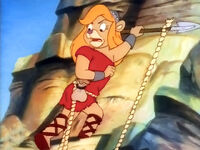 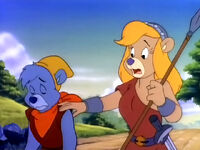 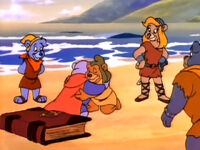 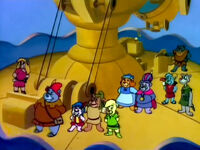 Retrieved from "https://disney.fandom.com/wiki/Ursa_(Gummi_Bear)?oldid=4476380"
Community content is available under CC-BY-SA unless otherwise noted.