Polyps from the fairy tale The Little Mermaid

Ursula's Garden is her collection polyps that hang around the main entrance to her lair. Each was once a miserable merperson who came to her for help in some matter but couldn't afford her high demands, leaving them helpless before her power.

Taking the form of polyps, these former Merpeople are small plant-like animal hybrids that just sit on the ocean floor crying in agony, and occasionally being fed dead fish by Ursula. They will usually be just a head attached to a stalk with roots, but sometimes may just be a head in the ground. These polyps have mottled green skin and yellow eyes (that often vary in size), which can stretch when they are surprised.

Certain polyps may have extra appendages, such as tentacles that may be dangling and long, or short but bulgy. Usually, the polyp will resemble the merfolk it once was, but in a more twisted way, such as the female polyps having female lips and noticeable eyelashes, and the males may have beards.

They are harmless individuals who spend their time screaming in agony in Ursula's lair. While their individual personalities can't be fully dissected, considering how Ursula often preys on those who are desperate, a good deal of them would be merfolk who let themselves get caught up in their desires, but couldn't find the inner strength to fulfill them themselves. Some of them may also be greedy individuals who believed they could take an easy way out of their troubles. In the end, they all just spend their time crying and moaning, hoping others could avoid their fate. After Ursula was killed they were relieved and glad that they transformed back into their true selves.

The polyps first appeared when Ursula chuckled at the idea of Ariel becoming a "charming addition to her little garden".

They weren't seen again until Ariel, disgusted by their sight, went to Ursula's lair, but continued forwards anyway. They fearfully moaned at her and one grabbed her wrist and tried to pull her away from Ursula's lair, but in a fit of fright, she managed to break free.

During the song "Poor Unfortunate Souls", Ursula explained the backstory of how all her polyps were merfolk who came to her for help but were unable to pay her price, so she took them as compensation, and if Ariel was unable to complete her side of the deal, she would be transformed along with them. The film also implies that their souls were absorbed by Ursula in the process.

During the battle with Ursula, King Triton was transformed into a polyp when he decided to take Ariel's place in the deal. However, when Ursula is killed by Prince Eric shortly after, King Triton and all of the polyps in the garden transform back into merpeople because when Ursula died, so did her spells and these merpeople are seen leaving her lair afterward.

The polyps in Ursula's lair were never featured in the show itself, but a creature of similar appearance did appear in the episode "Tale of Two Crabs". In this, Ursula steals a magical stone which she uses to transform the denizens of Triton's Palace into what she calls "worms". When she successfully manages to transform King Triton, Ariel, and Flounder, it fell unto Sebastian's rival Zeus to save the day by destroying Ursula's stone.

In the episode titled "Pete's House of Villains", Pete hires Ursula to seat guests to their tables, only instead of seating them to tables, she transforms them into polyps. King Triton is the first one to be transformed and see on screen. His appearance is vastly different from his appearance in the movie; what with his eyes being white instead of golden, his crown shrinking with him, and still sporting his white beard.

Fast forward through the episode and Pete is firing Ursula because of this behavior. In annoyance, Ursula briefly transforms him into a polyp. He bounces away in a huff, warning her not to "splutter any ink on the way out". Though later in the episode he appears to have made a recovery.

In the NES games, the polyps are stationed in the far end of Ursula's lair, in a hallway just before your encounter with her. Because of Ursula's lair being designed as a maze, the polyps serve the purpose of telling the player that they have reached the correct destination and are on their way to fighting Ursula.

All they shall do is point vertically from the position they are in and bite at Ariel, most likely warning her to turn back. But they will hurt the player if touched.

In the SEGA genesis game, Ursula has transformed the entire kingdom of Atlantica into polyps and have scattered them across the ocean. It's up to Ariel of King Triton to free them from the spell.

For the whole game, the polyps serve as items to collect. Simply touching the polyps will free them from the curse and return them to their merfolk forms. Ariel's singing is also able to free them as well.

In the game, along with the random polyps Ariel or King Triton have been transformed into polyps and are being held hostage by Ursula in her fortress.

In the game, the polyps can be found in Ursula's lair and during the final battle. If the player were to click on them, all that would happen is that they would moan and groan in agony.

In the game, after the final battle takes place the polyps will transform back to normal, and Ursula will have been transformed into a polyp herself.

The second minigame where they're featured is the Ursula minigame, where you battle Ursula in her giant form. Once again they are background objects.

The third minigame is King Triton minigame. In this minigame, you knock your pinball into the creatures, and after two hits they shall be transformed back to normal. The goal is to free every polyp on the board so that you can free King Triton, who is the final polyp you must rescue.

In the game, you control Ariel as she travels to Ursula's lair. Once inside you must get through her garden of polyps to reach the main hall of her lair. The polyps will swing back and forth to hit Ariel, and she must maneuver through the tight corridors to escape them.

They will also appear as background decorations during the final battle with Ursula.

In Kingdom Hearts, the polyps can be seen in the front of Ursula's cavern in the Tidal Abyss. All they do in the game is watch Sora. They will follow him wherever he goes but do nothing else. Strangely, after Ursula is defeated the polyps do not return to their original forms, probably due to complications with the hardware.

In Kingdom Hearts II, King Triton is briefly turned into a polyp and is about to be killed by Ursula, until Eric interrupts the act by throwing his spear at her.

In the first Kingdom Hearts manga, King Triton is transformed into a polyp when Ursula uses his Trident against him. The polyps in her garden were all described by Ursula as "Liars whom came to me for help but couldn't pay the price". When Ursula is defeated, they all transform back into normal merfolk.

“Those belong to me dearie, go find your own!”
―Ursula, when the player loses the game

The polyps make an appearance in the Disney game, Disney Villain's Challenge, as the objective to a minigame called "Point out the Polyps". In this game, the player has to find the polyps scattered across Ursula's lair and tap on them to set them free.

In the manga, Kilala Princess, the polyps make a short appearance shortly after Ursula has knocked Kilala into submission. After she declares herself to be the queen of the ocean, Ursula turns to Kilala and tells her that she'll turn into a polyp during the celebration.

We look upon the garden for the first time.

Ariel looks upon the garden for the first time.

The group looks upon Ariel with somber faces, warning her not to come.

One of the polyps grabs Ariel.

A projection of a merfolk couple transformed to polyps in Ursula's cauldron.

The mere sight of Ursula scares these guys witless.

Ariel's transformation is slowed down so Ursula can make the deal with her father.

Ariel somberly looks at the remains of the once great king.

The polyps looking upon the remains of Ursula.

The polyps transform back into their true merperson forms.

(From left to right) Flounder, Triton, and Ariel transformed in the series.

Ariel passes over Ursula's somber garden in a coloring page.

Ursula begins to transform Ariel as seen in a Japanese storybook.

The polyps in the Kingdom Hearts manga.

In the manga, Kilala Princess: Ursula threatens to transform Kilala into a polyp.

The polyps as seen in the NES video game.

In this pinball minigame, the player must rescue Ursula's garden using the pinball.

Ariel's transformation as seen in the Sega game.

The garden of lost souls.

King Triton transformed into a polyp in Kingdom Hearts II. 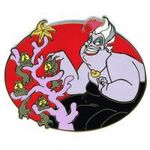 A pin showing Ursula hanging her garden as if they were Christmas decorations.

A pin of Ursula with the crown, overlooking her helpless garden.

the garden as seen in the Little Mermaid on Ice attraction.

Triton isn't given much time to think as his daughter shrivels away in this storybook.

The Polyps in Disney Villains Challenge.

Pete transformed into a Polyp.