Far From the Tree
Us Again is a 2021 3D computer-animated short that was produced by Walt Disney Animation Studios. It was released on March 5, 2021 alongside the feature film Raya and the Last Dragon simultaneously in theaters before coming to Disney+ on June 4.

Us Again tells the story of an elderly man named Art and his young-at-heart wife Dot who rekindle their zest for life through dance one magical night.[1]

As the people of New York City dance to the beat of the music, the elderly Art stays in his apartment and grumpily watches TV. His wife, Dot, enters and tries to have him get out and enjoy the day. He refuses, leaving her heartbroken. Art soon regrets this decision and looks upon a photo of himself and Dot when they were young and full of life. He steps out on the fire escape of his home when it suddenly begins to rain. The rain makes him younger and rejuvenates him and sets out into the city to look for Dot.

Art and Dot encounter each other, with the latter also having become young through the rain, at a water fountain and begin to dance vibrantly through the streets. When the rain clouds begin to move, the dryness reverts them to old age. Art begins dragging Dot through the city in an attempt to remain young with her. They flee to Paradise Pier with Dot willingly falling behind while Art continues to chase the rain clouds. Eventually, the clouds leave completely and Art reverts back to an old man along with Dot.

Art walks back and sees Dot sitting by herself on a bench and joins her. The two look into each other's eyes and wordlessly acknowledge their love for one another. Art and Dot proceed to dance together, though not as vibrantly as before, as a younger couple watches them admirably from afar. The rain puddle beneath them reflects their younger selves. 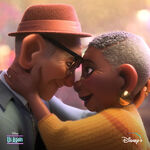 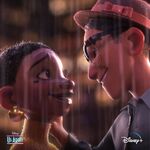 Retrieved from "https://disney.fandom.com/wiki/Us_Again?oldid=4566623"
Community content is available under CC-BY-SA unless otherwise noted.