Hippity Hoppity Springtime
Usatama on the Run! is a parade held during the Easter event at Tokyo Disneyland. This parade debuted in 2017. Judy Hopps and Nick Wilde made their Tokyo Disneyland debuts in this parade. Also, this is Tokyo Disneyland's first seasonal parade to be sponsored.

On March 24, 2021, Tokyo Disney Resort reopened after being temporarily closed due to the COVID-19 pandemic in Japan for over a year ago. Tokyo Disneyland announced that the updated version of the parade shows will resume on April 1, 2022.

Mysterious creatures called Usatama are running all over Tokyo Disneyland and they won't stop playing pranks. So Mickey and his friends become Usatama Chasers and set out to catch the Usatama by using various machines, such as giant vacuum cleaners or giant nets. 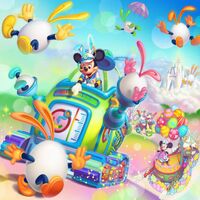