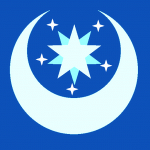 To help others, to sell his wares

Born to nomadic merchants, Midnight learned the tricks of the trade in bartering and selling, helping his mother make jewelry and clothes while his father taught him other skills. When he was nine, however, Midnight discovered he had a gift in magic when he fell into a pit and the only way out was root that was too high above him. Scared but keeping his head, he reached for the root, just out of his reach and imagined the root growing long enough for him to grab and pull himself out - and that's exactly what happened!

He ran to get home to tell his parents and almost didn't notice that he ran over a pond without falling in, having literally walked on the water's surface!

When he told his parents and showed them, they realized he had potential and a future in magic, and so sought the help of Merlin. The old wizard gladly took Midnight in as an apprentice but at the time, Merlin was busy being advisor to Arthur Pendragon so Merlin instead contacted his old colleague, Yen Sid, and managed to get Yen Sid to agree to take over Midnight's training.

Midnight trained alongside Yen Sid's first apprentice, Mickey, and they became good friends over a story Mickey told Midnight about how he'd played with their master's wizard hat and accidentally created a mass of living broomsticks that caused a flood.

After a few years of training, study, and practice, Yen Sid then announced to his two apprentices the time had come for them to each go on a journey and use what they learned to help others.

Midnight is a merchant, magician, adventurer, and warrior, as well as a survivalist, artist, and writer.

As Midnight often lives on the road in his wagon, he has learned various skills for survival and living outdoors, as well as hunting.

Having been taught the basics from Merlin and the advanced arts from Yen Sid, as well as trained alongside Mickey, Midnight is a talented and powerful magician. He can cast simpler spells with his words or a wave of his hand, and can move objects with his mind alone (telekinesis) and he learned how to shapeshift in to certain animals.

In his childhood, he discovered his power to command the natural elements: Earth, Fire, Air, Water, even Nature and Ice. His ability to command certain elements are limited, such as needing fire or water to be present (he cannot create fire except with a spell, and there must be sufficient sources of water nearby), and he can only control plants and make them grow at the expense of his own energy. However, with the elements of earth and air, it is easier as both are ever-present. His power to command Ice requires water and cold, which he uses to freeze the water into ice, snow, and frost.

He is also skilled in Enchantment, such as making magical objects, tools, etc., and has learned how to make potions, elixirs, and other mystical concoctions, using these particular skills to make his magical wares as a merchant. He is able to bewitch others to forget things he doesn't want them to remember, to be easier to persuade, and to do something he wants them to, but as a magician of honor he never uses these sorts of spells on the general public or his customers.

His knowledge of mystical lore is impressive, as he knows of various forms of magic, as well as old languages, markings/symbols/sigils/runes, and has been taught how to detect hints, however subtle, of magic at work even remnants of magic.

Midnight's artistic skills don't all involve magic; he is also skilled in drawing (mostly sketches), has some experience in making jewelry from natural materials, and he often plays an ocarina gifted to him from his mother. He also takes pride in writing stories, often of his own adventures, the people he meets, the places he's visited, and the sights he's seen.

Midnight's father taught him the necessary skills needed in business, such as bargaining, determining something's value, etc. As a merchant, Midnight strives to sell his wares at fair prices, depending on certain situations.

Midnight was given this spellbook from Yen Sid to take with him on his journey. It is a leather-bound tome filled with various spells, recipes for potions, and pages of mystical lore on magical creatures, mystic artifacts, and the supernatural properties of certain herbs.

Midnight's wand was given to him by his master, Yen Sid. It is 15 inches long, carved from pine, and covered with mystic markings. Midnight uses it to cast his spells and as his magical mastery grew, he learned how to transform his wand into a staff.

As a staff, it is a little taller than Midnight, topped with a carving in the face of a beast, ornate with a few gemstones and silver.

Midnight usually keeps it as a wand for easier storage and concealment and can still use his magic well with it this way. But when faced with real threats, he lengthens it into a staff for the full potential of his magic, since keeping it as a wand holds his magic back.

In his travels, Midnight has met many people and interesting creatures, coming in all shapes and sizes.

Merlin was Midnight's first teacher in magic, and taught him some of the basics in spells and sorcery. However Merlin found his time divided between being advisor to King Arthur Pendragon and Midnight's teacher to be difficult and decided to ask his friend Yen Sid to take over Midnight's training. Midnight kept in touch with Merlin with letters, and they remain friends.

Yen Sid was Midnight's second and permanent master in magical study. Yen Sid was strict but kind to his second apprentice, training him along his first, Mickey. He taught them magic but also disciplined them with chores in his tower, as well as a strict rule of not touching his Sorcerer Hat. Once Midnight and Mickey had reached a certain level in their training, Yen Sid sent them out to use their magic to help others and find their own way on a walkabout.

Midnight holds his master, Yen Sid, in high regard.

Mickey is Midnight's fellow disciple under Yen Sid, and they trained together in magic. They first bonded when Mickey told Midnight about how he once played with their master's sorcerer hat and caused quite a mess, which taught Mickey to have a greater respect for the power of magic.

They two became good friends and helped each other throughout their training and studies. When Yen Sid sent them out on a walkabout, they said goodbye with a promise to see each other again.

After departing on a journey, Midnight found himself to be lonely and unsure of what he should do, when he was happened upon by an invisible figure. Using a spell, he forced the figure to reveal itself to be a big funny dragon. With a spell of communication, Midnight learned the dragon's name was Elliott and they became friends. For a while they traveled together though Elliott's mischief sometimes tested Midnight's patience. Then they came to a point where Elliot told Midnight there was a child who needed him, so Midnight gave his friend a magic amulet that would allow them to find each other if ever one of them needed the other, as well as a memento for Elliot to remember the young magician by.

As Elliott flew off, Midnight reminded him to stay invisible, and the dragon vanished.

Midnight found himself before a shining castle, and helped the servants outside, who invited him to spend the night to rest from his travels. It was there, Midnight met the master of the castle, Prince Adam, and his wife, Princess Belle. As thanks for giving him shelter for the night, Midnight used his magic to give them a show.

But that night, an assailant broke into the castle and tried to kill the prince and princess. Midnight sensed the remnant of a spell on Prince Adam and reignited it, transforming the prince into a Beast. The Beast defeated the assailant and Midnight undid the magic, reverting him back to Prince Adam, who thanked Midnight for helping him. After learning the prince's story, Midnight charmed the clasp of a cloak and gave it to Adam, telling him if ever he needed strength, the cloak would turn him into his Beast form and back whenever he wished. At Prince Adam's insistence, Midnight accepted a wagon as a token of gratitude and thanks, along with a horse to pull it.

Midnight met Belle in her husband's castle and found they had much in common. She showed him her grand library and they talked over books, Belle of stories and fairy tales, Midnight of magic books and legends.

That night in the castle, an assailant tried to kill Belle and her husband and Midnight invoked the remnant of the spell on the prince, turning him into a Beast, and enabling him to defeat the assailant. Belle was grateful to Midnight for helping her husband and dispelling the magic, as well as giving him a cloak that would enable him to shapeshift to and from his Beast form whenever he wished. At their insistence, they gave Midnight a wagon and a horse in gratitude and friendship.

During his travels, Midnight met a fellow wanderer, a young man named Flynn Rider. They shared a campfire that night, talking and having a few laughs. But the next morning, Midnight discovered his money was gone, so in a rare act of vengeance, he cast a spell on Flynn that no matter where he went, people who drew his image would get his nose wrong, as Midnight recalled Flynn being rather vain about his looks.

Retrieved from "https://disney.fandom.com/wiki/User:Midnight_Blaze_V?oldid=3320444"
Community content is available under CC-BY-SA unless otherwise noted.