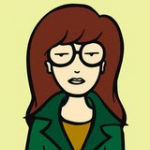 I own a lot

Your basic average girl, and she's here to save the world, you can't stop her 'cause she's...wait...

Um, what the Whomp?

For love and justice, a cute editor in a red hat and green sweater, T.J. Detweiler! In the name of Disney, I shall punish you!

Hey, it's me, T.J. Detweiler. You can call me Teej. Disney has and still is my life, and my first Disney movies (on tape) were The Lion King, The Jungle Book, Fun and Fancy Free, Toy Story, Bambi, Alice in Wonderland, and Sleeping Beauty. Those were the ones I started with. I have a lot more...

Favorite Disney movies? Really hard. I love all of them (minus G-Force, Mars Needs Moms, and present-day Disney Channel (except Phineas & Ferb, I love that show)), and I can't even make a top five!

I also like a lot of Disney's TV shows (again, minus a lot of the new stuff on Disney Channel), and I really loved the One Saturday Morning block. As you can tell, Recess is one of my favorite Disney shows. I also love Doug, Pepper Ann, Lizzie McGuire, 101 Dalmatians: The Series, The New Adventures of Winnie the Pooh, Kim Possible, and a whole whompin` lot more.

I love Disney World, even if I only went two times (once in January 2001; again in April 2011). We're planning on going again, but we don't know when. My favorite rides are Splash Mountain, Big Thunder Mountain Railroad, and Space Mountain. I have never been to Disneyland, however my parents have gone there on their honeymoon.

Oh! Now for some other whomp! My birthday is August 21, 1996. I'm a girl (yes, despite what my username is. Hey, he's my favorite character) with short blond hair with bangs, blue eyes (with glasses), and am very slender. I am somewhat of a geek, and I have asperger's syndrome. I have a puppy named Juno, who's a Beagle/Border Collie mix (i once owned three cats; all deceased). Aside from Disney, I also love anime, drawing, music, My Little Pony: Friendship is Magic, and '90s Nick. I'm a huge animation fan.

On a related note, I love to listen to the Spice Girls and Daria is singlehandedly one of the greatest cartoons ever made in my opinion.

My favorite animated shows which AREN'T from Disney

Retrieved from "https://disney.fandom.com/wiki/User:T.J._Detweiler?oldid=3320566"
Community content is available under CC-BY-SA unless otherwise noted.