Hulk: The Game is a 2017 open-world action game created by Cloverfield monster starring the character the Marvel Comics character, Hulk. It is a spiritual successor to the 2005 game, Hulk: Ultimate Destruction, as it shares similar gameplay, though in terms of events and story, it has no connection with that game. The game is developed by Activision and is distributed by Marvel. The game takes place in the Marvel Cinematic Universe, after the events of Captain America: Civil War and before Avengers: Infinity War. The game is rated T for Teen and is available on Playstation 4, Xbox One, and the Nintendo Wii U.

The game takes place in the Marvel Cinematic Universe, after the events of Captain America: Civil War, and before Avengers: Infinity War. Bruce Banner (Mark Ruffalo) and his enraged alter ego, The Hulk, battle The Leader, a gamma mutant with a super-genius intellect and telekinetic powers. It turns out The Leader was actually Banner's old friend, Doc Samson, aka, Mr. Blue, from the film The Incredible Hulk. The Hulk and Bruce Banner are forced to stop The Leader's plan to use Hulk's blood to create an army of mutant gamma soldiers and weaponize them, which if he succeeds, could wipe out all of mankind.

The player controls The Hulk. In the game, Hulk is allowed to explore and smash 3 large open-world environments when not engaged in missions. These environments consist of New York City, The Badlands, and the suburban town of Vista Verde. Every single thing in the environment can be destroyed. Cars, lamp posts, trees, certain buildings, buses, all of that can be smashed and obliterated. Hulk also has very versatile movement in the environment. An example of unstoppable movement is being able to run up walls, climb up walls and leap great heights. You can also unlock new attacks and characters via an Upgrades Store by gaining and spending "Destruction Points". These are earned based on how much destruction you cause in the environment and how much you smash during your rampage.

Hulk is also capable of unleashing powerful attacks once he enters a state called, "Critical Mass". This activates once Hulk reaches full health, bringing out another bar below that determines how much power you have to unleash these attacks. Some of them include, Mega Thunderclap, a giant sonic clap that will instantly obliterate anything within the blast radius. There's also Worldbreaker Hulk , a form that you can activate for a limited time, which will temporarily enchance all your attacks enormously, making everything you attack get destroyed in one hit.

Not only can everything in the environment be destroyed. Objects can also be used as weapons. For example, you can use throw vehicles or pieces of debris at your opponents. You can also tear a car in half and use them as boxing gloves. You can even takes pieces of destroyed buildings and use them as bowling balls or surf on a smashed bus, crushing all in your way. You can use lamp posts and trees like baseball bats to smash enemies and ojects with.

When not engaged in story missions, the player is free to do whatever he or she pleases. If the player wants to just go on a rampage and destroy everything in sight, they can do that. If they want to continue the story, it's available to them at any time. If they want to thow people off buildings or throw cars into the ocean, they can. It's all about letting the player feel like they are The Hulk and giving them choice.

New York City, one of the levels in the game.

Vista Verde, one of the game's levels.

Small Town & wilderness in Oregon, one of the game's levels.

Hulk, the main character and the one the player controls.

The Leader, the main villain of the game. 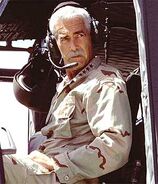 General Ross, Hulk's nemesis and a secondary antagonist
Add a photo to this gallery

You can unlock various characters to play as as you progress through the game. These characters are unlockable by earning the right amount of Destruction Points to buy them in the Upgrades Store, and when you do, will be free to rampage playing as any of these characters. Some of these characters may actually play an important role (Abomination, A-Bomb), while others don't (Rhino, Grey Hulk), and there are also some there for the sake of a laugh (Wreck-it Ralph and Bruce Banner) 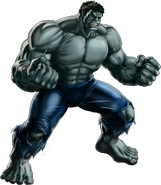 Grey Hulk (before he gained his love for green).

Red Hulk (the General who became the very thing he was trying to hunt).

Bruce Banner (all the power of the Hulk and none of the green).

Hulkbuster Iron Man (the famous billionaire genius is just as capable of doing a little smashing. Now, he's ready to prove it).

Joe Fix-it (a version of Hulk that wears a suit and makes wise-cracks). 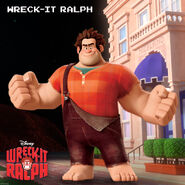 Wreck-it Ralph (He's gonna wreck it! The whole city that is.)
Add a photo to this gallery
Retrieved from "https://disney.fandom.com/wiki/User_blog:Cloverfield_monster/Hulk:_The_Game_(idea_for_new_Hulk_game)?oldid=1885555"
Community content is available under CC-BY-SA unless otherwise noted.